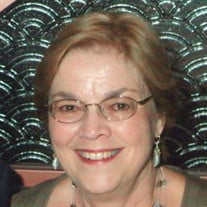 Shirley died on 2/1/2022 at age 88 at Epworth Villa in Oklahoma City. She was born on 12/14/1933 in Stillwater OK to Charles A. Pickett and Lela Young Pickett. Shirley graduated from Blackwell OK High School in the class of 1951. She then attended Oklahoma A&M College (OSU) where she joined Alpha Chi Omega sorority. She graduated in 1955 with a degree in Home Economics. Immediately upon graduation she married Roger Camp and they moved to Ames, IA. They both began a lifetime of teaching at the University level and went on to get Graduate degrees there. They celebrated 67 years of marriage this last June. In addition to her parents Shirley was predeceased by her sister Suzanne and brother Charles. Surviving, in addition to her husband Roger, is her sister Carol, a daughter Anne and son Edward and son Alan and his wife Jeanette. There are three grandchildren, Lia Camp as well as Ethan and Lily, and many nieces and nephews. They have, in their married life, lived at 18 addresses, seven of those were in Ames, IA. However, others have been from border to border and coast to coast, namely Minneapolis, MN, Poughkeepsie, NY, Tampa, FL, Tempe, AZ as well as San Luis Obispo, CA. During the year in Tempe AZ in 1974 she developed a great love for Native American arts and crafts, and collected pottery and art. They moved to San Luis Obispo in 1982, where they lived for 10 years and she taught at Cuesta Community College and worked as an Interior Designer at Amanda's Interiors. In 1993, when Roger retired, they moved to Austin TX to be near their daughter Anne, where she became active again in Lakeway Women's Club, PEO sorority which she had joined in 1967, and a tight knit group of friends who called themselves the Bellini Babes. In 2005 Ed's daughter Lia, at age 10, moved in with them and they raised her. They have traveled extensively and camped often. They went several times to the Boundary Waters Canoe Area where there is 1,000,000 acres of pristine wilderness, with no roads or other access and one must portage from one lake to another and carry tents and provisions. Also, they hiked to the bottom of the Grand Canyon and camped there for a week. They have traveled to every state as well as Brazil, England, Spain, Italy. There are no services scheduled at this time due to the prevalence of Covid and the inclement weather in Oklahoma City. Please, no flowers or gifts at this time. In their stead, please keep keep Shirley's family in your thoughts and prayers.

Shirley died on 2/1/2022 at age 88 at Epworth Villa in Oklahoma City. She was born on 12/14/1933 in Stillwater OK to Charles A. Pickett and Lela Young Pickett. Shirley graduated from Blackwell OK High School in the class of 1951. She then... View Obituary & Service Information

The family of Shirley Marie (Pickett) Camp created this Life Tributes page to make it easy to share your memories.