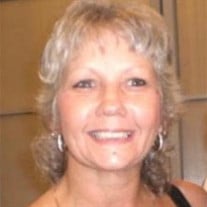 Roxie Webb-Hunt February 22, 1962 – December 17, 2019 Roxie Janette Webb-Hunt, 57, of Ponca City, Oklahoma went home to be with the Lord Tuesday December 17th. At her side, were her loving daughters. Roxie was born the 22nd day of February 1962 to Billy Gene and Shirley Marie Webb, in Castroville Texas. She grew up in Odessa as part of a loving family. Roxie attended Odessa High School. She married Jackie Havner and gave birth to her first child Chadisty Marie. She married Jackie Havner in 1978 and had her first daughter Chadisty Marie. In the summer of 1986 she married Bobby Hunt and together they had two daughters Bilbry Juanita and Colby Janette. Together they raised all three girls in a loving beautiful home. Although they were later divorced, the memories they made with family were countless. Roxie had an excessive love for anything shaped like a heart. Roxie would answer to an assortment of nicknames some included; Rox, Foxy Roxie, Grammy, Nanna Roc. She truly lived life by her own rules. She had a heart the size of Texas and refused to grow up. She was a kid at heart. She loved live music and old country songs. She absolutely loved singing along karaoke style. She really enjoyed making memories with her daughters and grand-children. Roxie’s love for her family was evident to anyone who knew her. Roxie was preceded in death by her Father, Billy Gene Webb and brother, PT Webb. Those left to celebrate her life are her mother Shirley Marie Webb, and her sister Billie Jean Jones, husband Bob Jones and brother Charles Webb. Her daughter Chadisty Pauly and husband Randy Pauly, daughter Bilbry Black and daughter Colby Hunt. She is also survived by her five grandchildren who loved her greatly; Cooper and Finley Pauly, Mackenzie, Jeffery and Tayler Black. Roxie was a loving aunt to her niece’s and nephew’s. Nieces Hattie Nash and husband Micheal Nash, Meagan Foster and husband Zed Foster, Raina Webb, Stormy and husband Eric Hawkins. Nephews JB Clark, Shane Webb, Chad Muncy, Charlie and wife Misti Webb. She loved her great-nieces and nephews so much. Special memories were made with Mason Webb; M'Kenna, Jacoby, Fallyn Nash Braydon, Andrew, Corey, Kasen Webb & Braden Gibson; Rayleigh and Kierstyn Kiefer & Carolyn Foster; Jessie, Samuel & Merrick Hawkins. Her family adored her and will miss her greatly. Two services will be held. One in Odessa, TX and one to follow in Ponca City, Ok. Family & Friends are cordially invited to a celebration her life with the family from two o'clock until five o'clock in the evening on Saturday, the 28th of December, Kellus Turner Park 2230 Sycamore Drive Odessa, TX 79763. Details for services in Ponca City, OK are pending. In lieu of flowers please consider donations to Pulmonary Hypertension Association https://phassociation.org/donate/ 💜Celebration of Life Honoring Roxie J. Webb-Hunt 💜 Monday December 30th 2pm-4pm The Fireside Room Hospice of North Central Oklahoma 445 Fairview Ave, Ponca City, OK 74601

Roxie Webb-Hunt February 22, 1962 &#8211; December 17, 2019 Roxie Janette Webb-Hunt, 57, of Ponca City, Oklahoma went home to be with the Lord Tuesday December 17th. At her side, were her loving daughters. Roxie was born the 22nd day of February... View Obituary & Service Information

The family of Roxie Janette Hunt (Webb) created this Life Tributes page to make it easy to share your memories.