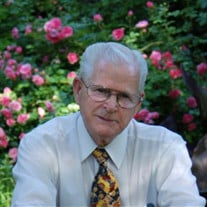 Robert Lee “Bob Bob” Self July 7, 1928 – Oct 26, 2018 Robert Lee Self was born in east Texas on July 7, 1928 and died in Oklahoma City, Oklahoma on October 26, 2018 at the age of 90. He lived a long and happy life, serving as a leader for his family, church and community. Bobby Lee Self was born to Joseph William Self and Jewel Bernice Duncan Self. He was one of 5 siblings, and grew up with his family moving around Texas following farm work. At 16, Bobby Lee lied about his age in order to join the Merchant Marines and serve his country. He changed his name to Robert Lee Self in an effort to seem older and more formal. During WWII, Bob served on the Segundo Ruiz-Belvis, a supply ship in the Pacific carrying much needed provisions to the troops. The ship in its duties, sailed around the world and even won a battle star for the assault and occupation of Okinawa. Bob served as an Engineer on the ship caring for the engine and other mechanicals. After the war he returned home and married Emily Elizabeth Summers on May 19, 1951 in Anson, TX. He returned to the Merchant Marines and continued serving during the Korean War, totaling 8 years of service. He credits his military service with his training in several trades which gave him a career as an Electrical Engineer, specifically with the All American Canal. Bob also worked at Sperry Rand Aeronautics and Sage Aeronautics. While working for GE he was tapped for a new program called computers, he received more training to become a Field Engineer and included time with Inforex, REI and Datapoint. These companies held contracts with several secure facilities. He often said, “I can fix, or break anything.” The couple moved to California where they welcomed a daughter, Sandra Kay, on September 3rd of 1952. The family spent many years living across the Western United States, including California, Arizona and later Texas. Sandy remembers when she was 5, writing a song, calling her Daddy “my warm cowboy”, he would snuggle her to sleep at night with purrs. When she was grown, he always entered her house saying, “what do you need fixin?” He received the Golden Veteran Award for 50+ years of service as a Mason. He was a member of the Imperial Lodge 390 in Imperial, California. Many foreign exchange students came to stay with Bob and Emily over the years. They hosted students from the ELS program at Oklahoma City University. He loved music and shared it with his family. He had a diverse musical library, from Spanish guitar to classical, and of course Country and Western. He was very active with Civic Music in Oklahoma City. He loved both WWII and Western movies, including Audie Murphy and John Wayne. Bob and Emily enjoyed the blessings of 4 beautiful grandchildren. Briton, Jason, Deshia and Clayton spent their lives learning the ways and mechanics of their “Bob Bob.” It was never too late to cook oatmeal and he was never too busy to teach his philosophies, beliefs, magic tricks, and terrible jokes to the next generation. He even won a “worst joke” contest on the radio. As long time members of First Baptist Church in Oklahoma City, Bob and Emily were active in Sunday school and service work in the church kitchen. He always felt that someone more powerful than the war was watching after him and because of that spent his life serving his God and Protector. Bob was preceded in death by his brother Bill Self, his sister Jean Patrick, his grandson Jason Garman, and his Mom and Pop. Bob is survived by his sisters Helen Fereday and Joyce Philand, his wife of 67 years Emily, his daughter Sandy, grandchildren Briton Garman and wife Tonya, Deshia Powers and husband Mike, Clayton Stroup and wife Taylor, and 4 great grandchildren Woodson Garman, Zelle Garman, Emma Powers and Jack Powers. Bob was a man of the ages. He collected, fiddled, designed and invented, all of it carried with love. It was believed by all who knew and loved him that he could do anything. He will be dearly missed by his many friends and family.

The family of Robert Lee Self created this Life Tributes page to make it easy to share your memories.

Send flowers to the Self family.