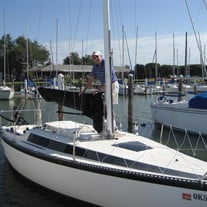 Rob was born May 30, 1926 in Oklahoma City to Holly and Edith Prime. He passed away January 18, 2019. He attended Classen High School and was accepted into the US Navy V-12 program for Officer Training and assigned to Louisiana Tech University in Ruston, La. He was honorably discharged from the Navy in 1946. Rob graduated from the University of Oklahoma with a Bachelor’s Degree in Business Administration and was a member of Kappa Sigma Fraternity. During this time, he received his Private Pilot License. During the Korean conflict, Rob enlisted in the U.S. Air Force Aviation Cadet Program, training in the T-6 Trainer and B-25 Bomber. He earned his wings and 2nd Lieutenant’s commission at Vance Air Force Base in June of 1953, graduating 5th in his class. Rob applied for Air Force Helicopter School and was accepted. Upon completion, he served a short term at Goose Bay Air Force Base in Labrador, Canada, and then transferred to the 41st Air Rescue Squadron at Hamilton Air Force Base, California. Promoted to the rank of First Lieutenant, Rob flew Air Rescue missions in S-55 Helicopters, SA-16 Amphibians, and earned a Sikorsky "Winged S" medal for saving a life with a Sikorsky Helicopter. He was discharged from the Air Force in 1957, Rob flew helicopters with Los Angeles Airways, a helicopter airline serving the greater Los Angeles area with twin jet-engine 28-passenger helicopters for14 years, advancing to Captain. In 1970, he moved to the Procurement Department at McDonnell Douglas Astronautics Company in Huntington Beach, CA. Rob was a Senior Buyer of High Reliability Electronic Components for Spacecraft Systems. In 1981, Rob accepted an invitation from his longtime friend John Beard to move back to Oklahoma, to manage his oil and gas company where he worked until retirement. Rob married Jessie Cox from Kinston, North Carolina. Together they had two sons, Michael and Jeffrey, and a daughter, Julie. Jessie preceded him in death in 1977. In July of 1988, he married Carolyn Shoemaker Harrison, a marriage lasting over thirty years. An avid skier, motorcyclist, and sailor, Rob raced his sailboat, “Aurora” as a member of the Oklahoma City Boat Club. He served as Treasurer in 2005 - 2006, and served on the Race Committee. Rob was preceded in death by his parents, his brother Lawrence and his sister Dora Prime Smith. In addition to his wife Carolyn; son Michael and his wife Jane; son Jeffrey, his wife Christine; daughter Julie Lindley, husband Brad, Rob is also survived by two grandsons, Kyle Lindley and Nicholas Prime, and two granddaughters, Crystal Lindley Anderson and Alyssa Nicole Boldt, and three great-grandchildren. In lieu of flowers, please make a contribution to the charity of your choice. Services are Friday, January 25, 2 p.m. at Corbett Funeral Home. Memorial Service Friday, January 25th, 2019 - 02:00 PM - Corbett Funeral & Cremation - Oklahoma City 807 W Wilshire Blvd - Oklahoma City, OK - 73116

Rob was born May 30, 1926 in Oklahoma City to Holly and Edith Prime. He passed away January 18, 2019. He attended Classen High School and was accepted into the US Navy V-12 program for Officer Training and assigned to Louisiana Tech University... View Obituary & Service Information

The family of Robert E "Rob" Prime created this Life Tributes page to make it easy to share your memories.

Send flowers to the Prime family.