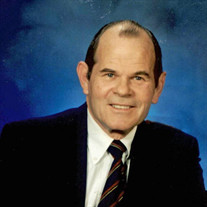 Rex J. Goodwin joined our Heavenly Father and his beloved wife Zayda on July 24th, 2021. He was born in Waco, Texas in 1932, to Julia Goodwin Van Camp and Rex Lester Goodwin. After moving to Oklahoma City in 1945, from Waco, Texas he graduated from Capitol Hill High School in 1949. In 1951, he entered the University of Oklahoma and studied under a Naval scholarship. He graduated in 1955 with a Bachelor Degree in Foreign Trade and commissioned into the Navy. He served in a pre-graduation cruise on the battleship Missouri and post-graduation on the carrier Princeton Pacific Fleet. His last days of duty was as an engineering officer on the Atlantic Oiler, AO-100, Chukawan, based at Norfolk, VA. Upon resigning his commission he took a job with a South American airline in Lima, Peru. Remaining in Latin American he started a position with an international financial organization offering financial services based in the U.S. servicing countries in South and Central America. In his travels he met and married the love of his life, Zayda Sanou in 1966. Together with their children, the family left Costa Rica as he accepted a position as an executive of an international mutual fund company based in London. After returning to the United States he worked for Bell & Howell Schools in several states, and explored several other business ventures including the importation of exotic woods from Latin America. In 1973, he authored a book urging the substitution of alcohol instead of gasoline and vegetable oils for Diesel. In 1996, after retirement from the business world to dedicate more time to the loving care he provided to his wife; he worked with a non-profit organization, National Toxics Campaign, an organization attempting to bring attention to the dangers of toxic materials in our State. He was also was employed through a contract with the VA in what he referred to as, “my most rewarding job”; transporting veterans to and from the VA Hospital for medical care and treatment. He would often mention the stories they shared during their trips and how he felt blessed to lend an ear. “Grandpa Rex” is survived by his daughters, Irene and Sylvia and son-in-law Bart Cox, granddaughter, Christie, grandson’s Derick, David and Nolan and great-grandchildren, Gabriel, Alexa, Caleb, Samantha, Danielle and David. He is also survived by his beloved sister Delight and her husband Harvey Nelson.

Rex J. Goodwin joined our Heavenly Father and his beloved wife Zayda on July 24th, 2021. He was born in Waco, Texas in 1932, to Julia Goodwin Van Camp and Rex Lester Goodwin. After moving to Oklahoma City in 1945, from Waco, Texas he graduated... View Obituary & Service Information

The family of Rex J. Goodwin created this Life Tributes page to make it easy to share your memories.

Send flowers to the Goodwin family.