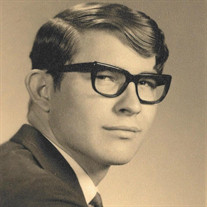 Raymie Harold Reeves II passed away in his home on December 29, 2021 in Midwest City, Oklahoma after a long battle with cancer. Raymie was born on May 24, 1949 in Merced, California, the son of Raymie Harold Reeves and Kathleen Louise (Bennett) Reeves. He had a lifelong career as a land surveyor on natural gas and oil pipelines as well as other energy transportation projects. Raymie married Patricia Elaine Bosshardt of Pontiac, Illinois on September 24, 1977. They were married for nine years, and had three children: Shawn, Dustin, and Sunshine. Raymie was a proud member of the Choctaw Nation and gave himself the tribal name Two Trees. He was a skilled craftsman and honored his heritage by making Native artwork such as peace pipes, necklaces, beadwork, and carved walking sticks. He often created with materials he found in nature in the course of his surveying work. Raymie was a voracious reader. Though his favorite authors were the likes of Asimov, Vonnegut, L’Amour, and Ginsberg, his appetite for knowledge was unlimited and his library was filled with books on all topics under the sun. He loved watching Jeopardy and beat many of the nightly winners from his favorite spot on his couch. Raymie was known for his sense of humor. He loved a good joke and was always looking for new pranks to play on friends and family. Raymie loved animals and kept many exotic pets during his life. In his later years, he poured his love of animals into his pack of “puppies”, Pilar, Abba Eban, Boots, and Tiger Rose. Raymie was preceded in death by his parents and his siblings Theresa McKenzie, Vicky McCuddy, and Gregory Reeves. He is survived by his brother Kenton Reeves; his children, Shawn Michael Reeves of Midwest City, Dustin Aaron Reeves and wife Amy Jean Reeves of Fort Myers, Florida, and Sunshine Kathleen Reeves of Indianapolis, Indiana; his grandchildren Alyssa Ann Janet Pringle, Samantha Emily Reeves, Morning Light Elaine Bolger, Evelyn Bella Mae Bolger, Brooklynn Lisa-Mae Reeves, Logan Michael Harold Reeves, Greyson Aaron Thomas Reeves, Ruby Elizabeth Bolger, and Aaron John Reeves; and by former spouse Patricia Reeves of Oklahoma City. It’s not easy to sum Raymie up in a few simple sentences. He will be remembered by his family and friends for many things, in particular for his humor, his intelligence, his even-temper and patience, and his unending love for his children.

Raymie Harold Reeves II passed away in his home on December 29, 2021 in Midwest City, Oklahoma after a long battle with cancer. Raymie was born on May 24, 1949 in Merced, California, the son of Raymie Harold Reeves and Kathleen Louise (Bennett)... View Obituary & Service Information

The family of Raymie Harold Reeves II created this Life Tributes page to make it easy to share your memories.

Raymie Harold Reeves II passed away in his home on December 29,...

Send flowers to the Reeves family.