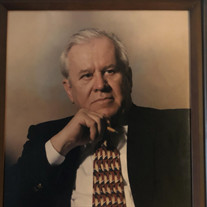 Paul John Johanning Born 8/26/1934 Died 10/23/2018 Paul John Johanning was born on August 26, 1934, in Manchester, Oklahoma, to August and Marie Johanning. Paul was the oldest of seven children. He was preceded in death by his brother August Johanning II. He is survived by his siblings Helen (Gordon) Ford, Elizabeth Busse, James (Margaret) Johanning, Bill (Theresa) Johanning, and Louise (Tom) Harrington. Paul grew up on a farm in northern Oklahoma. He was the valedictorian of his high school class. He graduated from Oklahoma State University with a degree in Political Science. He received a B.A. Degree from the Law School at Oklahoma University in May 1958. He was a member of Phi Delta Phi, The International Legal Honor Society. Paul was an attorney in Oklahoma City for over 60 years, specializing in Municipal Bond Issues. Paul travelled the world with his wife Evelyn. They travelled to Asia, Europe, India, Africa, and all over the US. His favorite trip was when they visited Egypt. He loved crossword puzzles and reading. Even as his eyesight failed, he would read large print books with a magnifying glass and listen to audio books. His grandkids and great-grandkids all called him Papa. Papa had a tool to fix everything, and he knew how to fix everything. If you had a question, he either knew the answer or he would look up the answer. He loved to discuss politics (if you knew what you were talking about). Paul was preceded in death by his wife Evelyn. He is survived by his children John (Christi) Johanning of Bon Secour, AL, Joe Johanning of Oklahoma City, Charley Johanning of Fredrickburg, VA, and Julie (Brett) Moler of Midwest City. He is also survived by stepsons Mark Ridener, Christopher Ridener (Elizabeth), Russell Ridener (Jeanine), all of Oklahoma City; and David Ridener (Beth), of Phoenix, AZ. Paul and Evelyn have 16 grandchildren and 14 great-grandchildren (plus three due in 2019). Memorial Service will be on Saturday, November 24th, with details to come. In lieu of flowers, read a book, donate a book, or give someone a book.

Paul John Johanning Born 8/26/1934 Died 10/23/2018 Paul John Johanning was born on August 26, 1934, in Manchester, Oklahoma, to August and Marie Johanning. Paul was the oldest of seven children. He was preceded in death by his brother August... View Obituary & Service Information

The family of Paul John Johanning created this Life Tributes page to make it easy to share your memories.

Send flowers to the Johanning family.