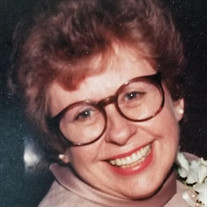 SACREY, Dr. Patricia Jordan Patricia Jordan Sacrey, 87, devoted mother and grandmother, passed away on Friday, August 22, 2020, in Edmond, Oklahoma. She was born in Tulsa, OK, on March 31, 1933, to Lucile Lois Cheairs and Amiel Ralph Jordan. Patricia married Frank A. Jackson on November 3, 1957 in Russellville, AR. To this union were born Catherine Patricia and Frank Andrew. Her husband preceded her in death and she married again to David Sacrey who preceded her in death in 2008. Patricia graduated from Arkansas Polytechnic College in 1954. She worked in the Springdale School District for 15 years as a teacher and school administrator. She went on to become an Assistant Superintendent of Ft. Smith Schools for 13 years before retiring in 1996. In her early days, Patricia was a Fulbright Scholar and studied in France during college. She was a member of Phi Delta Kappa, American Association of School Administrators, Delta Kappa Gamma and Arkansas Association of Educational Administrators. She attended the First Methodist Church and was a member of Beta Sigma Phi Sorority. She also had the honor to be the Arkansas Poultry Cooking Queen in 1965. She was preceded in death by her parents; her husbands, Frank and David. Survivors include sister, Pollee Gough (Jim) of Fresno, CA and brother Ralph Jordan of Glendale, AZ; daughter, Catherine D'Alessandro (Sam) of Oklahoma City; son, Frank A. Jackson III (Jan) of Foster, TX; grandchildren, Catie (Scott) Stutsman, Samantha D'Alessandro; Victoria D' Alessandro; Trinity (Robert) Griffith; Andy Jackson and Trevor Jackson; and four great grandchildren. The date for her memorial service will be determined and announced at a later date. In lieu offlowers please make donations to the Alzheimer's Association (alz.org); or to the M.D. Anderson Research Foundation. Arrangements have been entrusted to Corbett Funeral Home, Oklahoma City, OK.

The family of Patricia Jordan Sacrey created this Life Tributes page to make it easy to share your memories.

Send flowers to the Sacrey family.