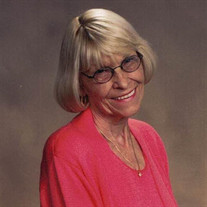 Patricia "Joan" Russell Sokolowski, 86, of Edmond, Oklahoma, a loving Mother, Grandmother and Great-Grandmother, departed this life on the morning of June 20, 2019, to join her Husband, Stanley A. Sokolowski, her Parents, George and Hazel Russell, her eldest Sister, Anna Buerger and her youngest Sister, Mary Hamdokh, in a better place. She was surrounded by Family until the end. Joan was born in Noble, Oklahoma, in 1933. She had three (3) Sisters, Anna, Sara and Mary, all of whom she loved and cared for very deeply. She continued to talk to her Sister, Sara almost every day. When she was younger, Joan pursued a career as a hair dresser and eventually owned her own Beauty Salon in Oklahoma City. While working as hair dresser, she went to school at night, to be a Legal Secretary. After moving to Tulsa in 1968, she found long time employment at Nichols & Wolfe, a multi-lawyer lawfirm, where she worked for approximately twenty (20) years, first as a Legal Assistant and later as their Office Manager. After the death of her Husband, Stan, she returned to Oklahoma City, where she continued to work part time, as a bookkeeper, with her Daughter, Deborah, until she was 85. She officially retired on January 15, 2018. Joan was a very independent, intelligent, and hard working person, who was extremely respected and loved. She was the epitome of integrity and her word was her bond. Her house was always spotless. She loved to read and loved to shop. She watched some OU and OSU football games, but she was a devoted Thunder Fan. She hardly ever missed a game, even when they played late at night. She knew the names and history of all the players. She got very excited when the Thunder made the play-offs this season. Throughout her life, Joan maintained a close relationship with both her immediate and extended family members. Her unique sense of humor, guidance and love, will always be remembered and cherished. Joan was survived by her Daughter, Deborah Streck and her Husband, Paul Streck; her Son, Charles Russell Henry; and her Son, Robert Keith Lueker and his Wife, Karen Lueker; her Sister, Sara Miller; her Grandchildren, Andrew Miskovsky, his Wife, Dianna Miskovsky; Raegan Scoggins, her Husband, Rocky Scoggins; Patrick Lueker, Nicole Lueker, Wesley Streck, his Wife Allison and Colton Streck. She is also survived by her Great­Grandchildren, Ariana Scoggins, Brayden Miskovsky, Ava Miskovsky, Gavin Streck, Parker Streck, Elizabeth Streck, and by her nieces and nephews Janet, Henrietti, Yasmine, Zaid, David, Hazel, Alcie, and Katy. A Memorial Service will be held at the North Side Christian Church, 2526 N.W. 122nd Street, Oklahoma City, Oklahoma 73120, on Saturday, June 29, 2019, at 10:00 A.M. In lieu of flowers, the Family has requested that memorial contributions be made to the Integris Hospice House, 13920 Quailbrook Drive, Oklahoma City, OK 73134, in the name of Patricia J. Sokolowski.

Patricia "Joan" Russell Sokolowski, 86, of Edmond, Oklahoma, a loving Mother, Grandmother and Great-Grandmother, departed this life on the morning of June 20, 2019, to join her Husband, Stanley A. Sokolowski, her Parents, George and Hazel Russell,... View Obituary & Service Information

The family of Patricia "Joan" Russell Sokolowski created this Life Tributes page to make it easy to share your memories.