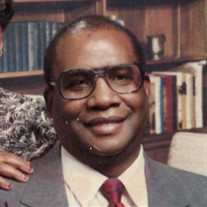 Nelious Grayson was born February 27, 1935 in Byars, OK to Isabella Grayson (deceased) and Leford Grayson(deceased). In this union Nelious was the first of 5 children born, then Theford Grayson, Nathan Grayson, Dora Evans(deceased) and Harrison Grayson. Nelious attended also graduated from Douglass Highschool. Nelious entered the military serving as a seaman from 1952-1956. After leaving the military, Nelious began a career as an engineer at Tinkerfield from 1956-1975. Nelious then became a school bus driver for the Oklahoma City Public Schools until he retired. Nelious was baptized as one of Jehovah's Witnesses on July 25, 1975 where he remained a faithful member until he was called home. Nelious was known for his hospitable and generous spirit, he truly loved people and enjoyed seeing them happy. Nelious was known for his big smile and his even bigger heart. If you spent any time with him, you knew right away that that he deeply loved and cared for people. He loved his family and he would speak hours talking to everyone about his God Jehovah, and it was that relationship with Jehovah that moved him to open his heart, his home and freezer to feed anyone at a moments notice. He was a man that was loved by everyone he knew. Nelious's health started to decline in 2016 and quickly progressed over the last year of him living. Nelious transitioned and was called home on January 22, 2020 at 7:40p.m. Nelious was proceeded in death by his Mother and Father Isabella and Leford Grayson; 4 ex wives and the latest Ida Grayson, Sister Dora Evans of Baltimore, MD, Daughter Dana Grayson, Granddaughter Taura Denson, Grandson Martinas Johnson and Great Grandson Jeremiah Grayson. Nelious was survived by 3 brothers Theford Grayson of Detroit, MI, Nathan Grayson of Kansas City, MO and Harrison Grayson of Oklahoma City. 6 children Dana Grayson( deceased) her children Danielle Grayson, Krystal Grayson, Omar Adams, Tyreal Fulson, Tyron Fulson, Sophelia Grayson and Ophelia Grayson of Oklahoma City, Randolph Grayson his children Elijah Grayson and Elizabeth Taylor of Oklahoma City, Rhonda Grayson-Prince husband Algernon Prince their children Ebony, Dena and Angela Prince of Edmond, Oklahoma, Darryl Grayson his children Tiffany and Darryl Grayson of Oklahoma City, Deitra Beach Grayson her children Shaun Grayson and Kenneth Johnson of Oklahoma City, Verneta Beach Grayson her children Cherika Grayson, Nakia Leonard and Preston Fletcher of Oklahoma City, Sherry Beach Grayson her children Charmetra, Tameeka and Willie Grayson of Oklahoma City. 3 Stepchildren Gerald Beach McKenzie, Sherrie Weaver and Felecia Wilson of Oklahoma City. He leaves his cherished memories to 59 great grandchildren and a host of nieces, nephews and relatives.

The family of Nelious Grayson created this Life Tributes page to make it easy to share your memories.

Send flowers to the Grayson family.