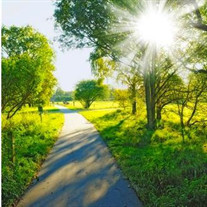 Myra Francis Burnside was born on January 26, 1949 in Oklahoma City, OK. She passed to her heavenly home on February 8, 2020. Myra graduated high school from Capitol Hill High School in 1968 and began working as a nurse technician at Baptist Hospital. While attending a social function, she met Jack Burnside and they were married in 1972 in Oklahoma City. In 1976 they moved to Farmington, New Mexico. In Farmington Myra worked for many years in the corporate office of the 7 to 11 chain of convenience stores as an accountant. her husband, Jack, passed from this life in 2017 and Myra moved back to Oklahoma City to be closer to family as she battled dementia and kidney disease. Myra crocheted afghans for many years and blessed many people with her work. Myra’s fingernails were always painted, even later in life when she needed help getting them done. Though she had no children of her own, her fur-babies were like her children. Every animal she adopted lived a long and spoiled life. Myra loved to travel to OKC every summer to spoil her nieces. She collected thimbles when she travelled. Her smile lit up the room. Her laugh was infectious and she loved a great joke. Myra is preceded in death by her husband, Jack Burnside; parents, Cecil and Zelma Richey; her older brothers, Neal Richey, Johnny Richey, Glen Richey; and her younger sister Gayle Richey. She is survived by her brother Dale Richey and wife, Patrice; brother Rick Richey; nieces and nephews Felecia Lee Black and husband, Roger; Olin Richey and wife, Jessica; Teresa Walley-McDonald and wife, Carol; Crystal Vance and husband, Kevin; Myra Ann Lewis and husband, Robert; and many great-nieces and nephews. Condolences may be expressed with family at www.CorbettFuneral.com or in person at Corbett Funeral and Cremation, 807 W. Wilshire Blvd, Oklahoma City, OK 73116.

Myra Francis Burnside was born on January 26, 1949 in Oklahoma City, OK. She passed to her heavenly home on February 8, 2020. Myra graduated high school from Capitol Hill High School in 1968 and began working as a nurse technician at Baptist... View Obituary & Service Information

The family of Myra Francis Burnside created this Life Tributes page to make it easy to share your memories.

Send flowers to the Burnside family.