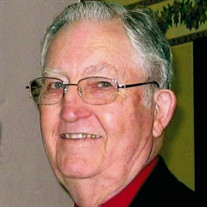 Mervin LaRoe Gordon was born on August 4, 1931 on the family farm in Turpin, Oklahoma. He was the ninth child out of 13 born to James Henry Gordon and Lila Irene (Kimble) Gordon. He loved helping on the family farm as a young boy which led him to learning to drive tractors and farm trucks by the age of 12. Merv attended school in Liberal, Kansas where he was a member of the Liberal High School Boys basketball team. He never lost his passion for basketball as he loved shooting hoops with his great grandsons well into his 80’s. He graduated high school in 1949 and shortly thereafter entered the Army where he was a mess sergeant in the 14th infantry. In 1951 he began serving in the Korean War where he fought on the front lines until he was honorably discharged in 1953. He returned to Liberal following the war where he served in the Army Reserves for eight years. It was during this time that Merv’s baby sister Sandy introduced him to her best friend, Maxine Janzen. Maxine tried to play hard to get but Merv remained persistent. Maxine was a Christian but Merv had yet to accept Christ at this point in his life. Merv loved to dance and was known to be the best in town when dancing the Jitter Bug, however, Maxine was not a dancer. Merv would take Maxine to the city dances on Saturday night where she would just sit and watch him dance and then she would take him to Church on Sunday. Merv finally won Maxine’s heart and they were married on April 30, 1955 in Liberal, Kansas. They did not immediately tell their families of their marriage as Mervin’s dad was the local bootlegger and Maxine’s family was one of his valued customers. Shortly after marrying, Merv and Maxine moved to Perryton, Texas. Mervin always loved animals and had wanted to be a veterinarian but knowing he would soon have a family to provide for, he went to barber school in Amarillo, Texas and became a licensed barber. He began his barber career at Glen Dye’s Barber shop in Perryton prior to becoming a business owner when he opened Merv’s Barber Shop on 3rd street in Perryton. He was known for his generosity and would often give free haircuts has fundraisers for the local boy scouts. In 1957 Merv accepted Christ as his personal Savior and he and Maxine joined the Assembly of God Church where they both remained faithful servants to Christ’s calling until their passing. He held many ministry positions within the churches that he attended including board member, deacon, counselor, Royal Rangers leader, Sunday school teacher and usher. Merv and Maxine were blessed with four sons: Dennis Lee, Gary Douglas, Glen Dale and Greg Lance. He loved his sons unconditionally and taught them what it meant to be a man of God and a leader of their family. Merv also treasured his 12 grandkids and 18 great-grandkids. Merv owned and operated his barber shop in Perryton from 1957 until 1990 when he and Maxine moved to Cedaredge, Colorado where Merv owned and operated his barber shop, Klassic Klippers. He retired to a two-day work week in 2000 when they moved to Calera, Oklahoma. They moved to Kingfisher, Oklahoma in 2007 and then to Yukon, Oklahoma in 2013. Merv finally hung up his clippers to the public in 2011 at the age of 80 but he continued to perm and cut Maxine’s hair up until she passed away in 2018. Merv’s sons and most of his grandkids and great grandkids received their first haircuts from Grandpa Merv. Merv had been a faithful member of OKC Faith Church since July 2007 where he was always quick to volunteer and help wherever he was needed. One of his favorite events to help with was Feeding 5000 every August. After a brief and unexpected illness, Merv spent Thursday evening with his sons and other family. During their visit Merv told them that he was tired and ready to go home. We thought he meant ready to come home to his house but Merv meant his eternal home. At 6:54 am on Friday, April 9, 2021 Merv had a conversation with God and peacefully slipped into eternity. The legacy that he leaves as a faithful Christian, a devoted husband of over 63 years and a loving father and grandfather will continue to bless his family and friends for many years to come. Merv was preceded in death by his loving wife Maxine, his parents, sons Dennis Gordon and Gary Gordon, daughter-in-law Paula Gordon, granddaughter Trystan Nikkole Gordon, 8 brothers and 1 sister. He is survived by sons Glen Gordon and wife Sandy of Yukon, OK, Greg Gordon and Wife Kris of Oklahoma City, OK, sisters Marjorie Spady, Loretta Krieger and Sandy Nielson and husband Chuck. Brother-in-law H.A. Janzen and wife Sue and sister-in-law Patrecia Young. Grandchildren Kimberly Gordon, Shanna Gordon, Jonna Dinkel (Steve), Alesha Gordon, Kenneth Gordon (Susana), Jeremy Gordon (Stacy), Malcolm Gordon, Scott Eudey and Tim Eudey, along with 18 great-grandkids- and a host of nieces and nephews. Funeral services will take place at 1:00 pm on April 15, 2021 at OKC Faith, 800 S. Portland, Oklahoma City, OK 73108 with public visitation from 11:30 am until service time. Internment will take place at a later date at Ft. Sill National Cemetery. In lieu of flowers, the family requests that donations be made in Merv’s memory to the OKC Faith Building Fund. You may view the live stream of Mervin's service at: www.okcfaith.com

Mervin LaRoe Gordon was born on August 4, 1931 on the family farm in Turpin, Oklahoma. He was the ninth child out of 13 born to James Henry Gordon and Lila Irene (Kimble) Gordon. He loved helping on the family farm as a young boy which led him... View Obituary & Service Information

The family of Mervin LaRoe Gordon created this Life Tributes page to make it easy to share your memories.

Send flowers to the Gordon family.