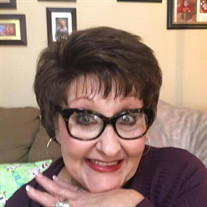 Margie Bentley Scott, born October 19, 1949, went to her Lord and savior on April 14, 2022. She was 72 for those of you who need a calculator, or just hate simple math. She is survived by a bunch of people including her three children, son Bo Bailey and wife Beth, daughter Christina Coffel and husband Dewey, and daughter Melissa Bailey. As well as seven grandchildren and four great-grandchildren, all of whom she loved tremendously, despite the interchanging of names, which the parents would correct, as needed. She is also survived by two sisters, probably some cousins, nieces and nephews, and so on and so forth. Who can keep track? She is preceded in death by her mother Allene Board, and her father Jim Bentley as well as beloved grandparents who she is probably catching up with right now. She had an exuberant and interesting life of spreading laughter whenever possible and engaging in passionate conversations of any-and-all current events. She thought that kept her vivacious and interesting. She was always eager to visit family and just as eager to go home thereafter. She wanted us all to remember to love one another like Jesus loved us, accept each other just as we are, and to always stand up for what is right despite what others may think of you. God’s opinion was the only opinion that matters. She volunteered throughout her life in service to other and her communities. She was a fundraiser for the Sheridan Opera House in Telluride, Colorado. She was also a fundraiser for the Grand Theatre in Electra Texas through the Electra Medicine Show. She served as a Councilwoman on the Electra City Council and was as a Court Appointed Special Advocate (CASA) volunteer in Texas. She worked as an employment specialist with AARP (formerly called the American Association of Retired Persons) in Oklahoma City. Local Services will be held at Corbett Funeral Chapel, 807 W Wilshire Blvd, Oklahoma City, on Wednesday, April 20, 2022, at 1PM. An additional memorial will be held in Electra, Texas at a future date for those who cannot travel. In lieu of flowers, consider a donation of time or money to a charity of your choice in her memory.

Margie Bentley Scott, born October 19, 1949, went to her Lord and savior on April 14, 2022. She was 72 for those of you who need a calculator, or just hate simple math. She is survived by a bunch of people including her three children, son Bo... View Obituary & Service Information

The family of Margie Lynn Bentley Scott created this Life Tributes page to make it easy to share your memories.