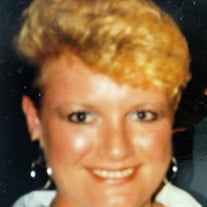 Graveside Service Saturday, February 26th, 2022 10:00 AM Memorial Park Cemetery 13400 North Kelly Oklahoma City, OK 73131 After services, lunch will be provided at: Charleston’s Restaurant 3409 S. Broadway Edmond, OK 73013 Marcie was born on 4/14/1951 in Lamar, Colorado. She is survived by her husband, Steve Crain; her son, Steven Crain (and his wife Amber Crain); her daughter Katrina Crain (and her wife Lesley Crain); and her granddaughters, Kaitlyn, Ashlyn and Alexa. She was preceded in death by her mother Carvel Hooker; her father, Lloyd Hooker; and her sister, Linda Hooker. Steve saw Marcie drive a friend’s Chevelle SS-396 4-speed, and decided it was love at first sight. He was the love of her life, too; and they married when she was just 18 years old. Throughout their entire marriage, Steve and Marcie were known for being deeply in love with each other. The family they built together meant everything to Marcie. On September 10th, 1970, she gave birth to her first child, Steven, who she referred to as her “baby boy” and “T-Bone.” On August 8th, 1972, she gave birth to her second child, Katrina, whom she affectionally called “Tiny Bean.” Having children was not their only life-changing adventure. When the kids were young, Marcie and Steve had a radical experience of Jesus Christ that immediately, and permanently, altered their lives. They raised their kids in Church, which is to this day one of her greatest legacies! Steven fondly remembers seeing his Dad read the Bible to Marcie every night in bed, an experience that has forever marked him. In her vocational life, Marcie started working as a file clerk for minimum wage at Bone and Joint Hospital, while pregnant, at the age of 18. She worked hard, and ultimately retired from the position of Billing Office Manager. A successful businesswoman, she was recognized as one of Oklahoma’s “Top 40 under 40.” She was a wonderful provider for her family. While she had a fierce work ethic, her long days at work didn’t keep her from attending her kids’ sporting events. Known for her fiery personality, nobody wanted to be in her way if she thought there was a wrong call or if there was a fight on the wrestling mat! Marcie loved animals, flowers, and nature in general. She would frequently go on walks and hiking trails with Steve, her kids, and her dogs. They especially loved to go to New Mexico and Colorado for nature hikes. She loved music, too, and some of her favorite songs were “Precious and Few are the Memories,” “Hooked on a Feeling,” and “Somewhere Over the Rainbow.” In her 30’s, Marcie was diagnosed with M.S., and ultimately lost the use of her legs. Steve became her caretaker and cared for her with unmatched fervor for 21 years, without complaint. No one could have taken better care of her than her tireless husband, and the entire family is deeply grateful for his love and commitment. She handled her disease with grace, always happy to see and entertain visitors. One of her greatest joys was having her grandkids visit—she treasured and kept every single card and picture the girls gave her! She was a remarkable woman who was deeply loved and will be dearly missed.

The family of Marcie Lee (Hooker) Crain created this Life Tributes page to make it easy to share your memories.