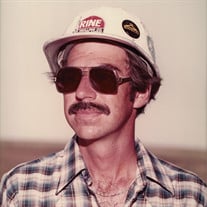 Lloyd Edward Hubbard, 69 of Oklahoma City passed away on Thursday, June 13, 2019. He was born on June 16, 1949 to Lester & Elsie Hubbard in Laverne, Oklahoma and while he was an infant Lloyd survived Polio. Lloyd married Patsy Herber and together they had two children: Wendy and Brian. He graduated from Laverne High School and from Southwestern Oklahoma State University with a degree in accounting. Lloyd hated office work so in the 1970’s he went to work in the oilfield for Arnold Jack Ellis at Rine Drilling, this was to be his favorite job of all time. Jack & Jean Ellis became his “parents” and were wonderful to Lloyd, Patsy, Wendy and Brian. Together they shared many meals and holidays as well as time at Grand Lake. In 2007 Lloyd retired due to failing health. Lloyd is survived by his wife Patsy, of the home, daughter Wendy and husband Dustin of Woodward, Oklahoma, and son Brian and partner Shaun O’Bryant of Oklahoma City, Oklahoma. He also leaves behind his beloved sisters-in-law: Rita Salmon & partner Ralph Hudgins and Billie & Tony White, brothers-in-law: Gary Carpenter and Van & Kathy Curtis; as well as numerous nieces and nephews, all of whom were so very good to him during his life. Lloyd asked that we express how very much he appreciated you all loving him, checking on him and always offering to help in any way you could. Lloyd was preceded in death by his parents, brother Verl, sister-in-law Sandy Carpenter, mother-in-law Ada Curtis, fathers-in-law: Milford Curtis and Bill Herber, brothers-in-law: Randy Loomis and Doug Salmon. A Celebration of Lloyd’s life will be held at 1:00 P.M. Saturday, June 22, 2019 at Corbett Funeral & Cremation in Oklahoma City, Oklahoma. In lieu of flowers please consider making a donation in Lloyd’s name to the Bella Foundation at www.bellaspca.org.

Lloyd Edward Hubbard, 69 of Oklahoma City passed away on Thursday, June 13, 2019. He was born on June 16, 1949 to Lester & Elsie Hubbard in Laverne, Oklahoma and while he was an infant Lloyd survived Polio. Lloyd married Patsy Herber and together... View Obituary & Service Information

The family of Lloyd Edward Hubbard created this Life Tributes page to make it easy to share your memories.

Lloyd Edward Hubbard, 69 of Oklahoma City passed away on Thursday,...

Send flowers to the Hubbard family.