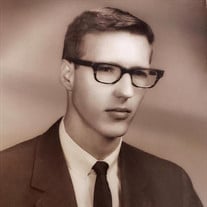 Larry Lynn Slaughter passed away in Garfield, Colorado, on Friday, July 24, 2020, at the age of 78. Born to Houston and Faye Slaughter in Elk City, Oklahoma, on July, 24, 1942, Larry was five minutes older than his twin brother, Jarry Slaughter. Their sister, Deborah, was born 8 years later. Following opportunities for work in the oil industry after World War II, the family moved to towns in Texas and Colorado, until they eventually settled in Oklahoma City. Larry graduated in 1960 from Northeast High School, where he played the saxophone in the band and was known occasionally as a jokester. This is where he met and became lifelong friends with Floyd Kennedy. He later attended Central State College (now UCO) in Edmond, Oklahoma, until he was drafted into the Vietnam Conflict in 1963, serving a tour of duty with the United States Army. While home on leave in the summer of 1966, Larry met the love of his life and future wife, Carol Krueger. They were married on November 30, 1968. Larry and Carol enjoyed a long and wonderful marriage, raising four daughters: Emily, Regina (Gina), Natalie, and Maleah. In the early 1980s, Larry took Scoutmaster training through the Boy Scouts, where he met another lifelong friend, Richard Schriver, who recruited him to work together on building a troop in Yukon, Oklahoma. Over the years, Larry mentored many young men and women through Boy Scouts and Girl Scouts, creating lasting friendships and becoming affectionately known as “Uncle Larry” to many scouts. Larry loved to fish, camp, hike, and backpack, as well as teach those he mentored how to do it all. After his service in the military, Larry worked for the Oklahoma Blood Bank, but he had a knack for fixing things, so his father-in-law, Carl, recruited him into the appliance repair industry. Eventually, Larry and Carol established Appliance Services, which they owned and operated together for over 30 years. Specializing in antique appliance and ceiling fan renovations and repairs, Larry found that he also enjoyed working on wheelchairs and scooters for the disabled and elderly in his later years. He had a talent for talking to people and making them feel at ease, and this rapport created many loyal customers. Larry will be remembered for his great sense of humor and the abundance of patience he had for everyone, especially for his daughters, all of whom loved him dearly. Larry was always supportive and encouraging to his daughters. He taught them to be strong, independent, and well-rounded women, believing they could do anything a boy could and teaching them just the same. His daughters will remember him as a kind, loving, and supportive father who would drop whatever he was doing to be there for them. Larry is survived by his wife of 52 years, Carol Slaughter; his sister, Deborah Slaughter; his four daughters and their husbands: Emily Wooten; Regina and Rodney Gordon; Natalie and Johnathon Robinson; and Maleah Slaughter and Drew Hanley. Larry is also survived by 15 grandchildren: (Emily’s) Tyler, Kortney, Scott, Jr., and Megan Wooten, and Tallon Herron; (Gina’s) Sienna Gordon; (Natalie’s) Houston, Connor, Keira, and Kathryn Robinson, and Tyler Toner; (Maleah’s) Brooke and Alex Ray, and Noah and Nick Hanley. Larry is also survived by several sisters and brothers-in-law, numerous nieces and nephews, as well as many honorary daughters and sons.

Larry Lynn Slaughter passed away in Garfield, Colorado, on Friday, July 24, 2020, at the age of 78. Born to Houston and Faye Slaughter in Elk City, Oklahoma, on July, 24, 1942, Larry was five minutes older than his twin brother, Jarry Slaughter.... View Obituary & Service Information

Larry Lynn Slaughter passed away in Garfield, Colorado, on Friday,...