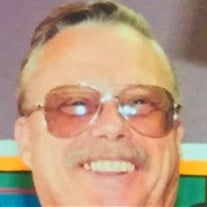 Larry C. Haggard of Oklahoma City, Oklahoma was born on November 14, 1939 the son of Paul and Lucille Haggard (Cole) in Oklahoma City at St. Anthony Hospital. He passed away on February 25, 2019 at St. Anthony Hospital. He attended High School in Duncan, Oklahoma where he grew up. He attended College at The University of Oklahoma earning a B.F.A. Degree in Industrial Design. In 1965 Larry started working with Armstrong Cork Co. in Lancaster, PA until 1969, he then took a job with Little Giant Co. in Oklahoma City from 1969-1970 and finally in 1970 worked for The Oklahoma Department of Human Services in Oklahoma City as a programmer until 1995. Larry was a member of the congregation at Portland Avenue Baptist Church. Some of his favorite hobbies were woodworking, collecting coins and stamps, collecting artwork, and working on electronics. His interests were vast. Larry was a very hardworking man with a heart of gold, he loved working on things around the house and anything that he could fix. He was the kind of man that you wanted to be or know. The men wanted to be him, and the women wanted to be with him. He always had his family taken care of financially, physically, and mentally. Not only was he hardworking, loving, humorous, and charismatic, he was also very intelligent; he excelled in things that came very hard to others such as advanced mathematics, chemistry, physics, arts, and programming. He was someone who could bring you up when you were down and always stayed strong physically, mentally, and emotionally for his family and friends. He lived an amazing life filled with so many memories that will be cherished forever. He was a sharp man with class and always had his priorities in check. He lived by God, family, friends and made sure work was always done before he would rest. Larry was preceded in death by both parents, a brother, Gayle Haggard, a his sister, Delia Haggard and his son, Todd Haggard. He leaves behind his wife of 16 years, Rosalia, his children Jeffery, Neal, Kevin, and Kyle Haggard as well as grandchildren, Hayden Haggard, Ian Haggard, Kedryn Haggard, Owen Haggard, Emily Odlozelik, Tiffany Purvis, Chelsi Haggard, Alexis Haggard, Triston Haggard, Christian Haggard, Titus Haggard, T.J. Haggard. Great-grandchildren, Olivia Odlozelik and Avery Haggard. A Funeral Service for Mr. Haggard will be held on Saturday, March 2, 2019 at One O'Clock in the afternoon at The Corbett Funeral Home Chapel.

The family of Larry C. Haggard created this Life Tributes page to make it easy to share your memories.

Send flowers to the Haggard family.