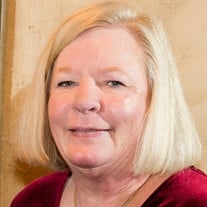 Kristi Lynn Oliver, 67, of Oklahoma City, OK, passed away Sunday, June 14, 2020 at her Nichols Hills home from complications of heart disease. Originally born in Fort Collins, Colorado on January 8, 1953, her family moved several times before calling Oklahoma City home. Daughter of Kay Goebel and the late Harry Goebel and beloved sister to her four siblings, Kathi Goebel, Dee Goebel, Karen Keith and Bart Goebel, family was of the utmost importance to her. They were not only family, but the best of friends staying extremely close throughout life. Kristi graduated from Putnam City High School in 1971 and went on to attend the University of Oklahoma in the years following. Meeting some of her best friends during these years, she added a few more “sisters” to her family. Kristi began her career in the oil and gas industry and remained involved for many years. She met Warren (Mac) Oliver while she was working in downtown Oklahoma City and on August 22, 1981, she married her soulmate. Tragically, Mac's life was cut short after a plane crash took his life at the young age of 30. They shared a love of humor, traveling the world, gourmet cooking and wine. The love between the two of them was undeniably one of a kind. As a couple, Kristi and Mac built a home in Oklahoma City, but their favorite place had always been Grand Lake. They spent summer after summer there and made memories that have spanned generations. Kristi continued to spend much of her time at Grand Lake after Mac's passing. Her enjoyment was contagious and she helped her entire family and all of her friends fall in love with lake life. Forty years of wonderful memories at Grand Lake and always the best meal on Monkey Island after a day out on the boat or a sunset cruise across the water. Her nephews and niece, Jake, Grant and Lexy, were the three biggest lights of her life. To them, and all of their friends, she was “Aunt Ishi.” While she never had children of her own, these three were her pride and joy and the closest thing she had to children of her own. She was more to them than just an Aunt, as they were more to her than just her niece and nephews. Her own children, however, were her dogs. She loved animals and always had a dog by her side. Kristi followed in her mother's footsteps in many ways, one being her pride and involvement in her community. Kristi was extremely involved in the Oklahoma City community, including serving as a volunteer with the Arts Festival of Oklahoma City, Planned Parenthood Great Plains, the Girl Scouts of Western Oklahoma, as well as a past board member the Oklahoma City Zoological Society. Additionally, she was a recipient of the Margaret Sanger Legacy award for Planned Parenthood of Central Oklahoma. If there were more people like Kristi, then the world would be a much better place. She was a wonderful daughter, sister, sister-in-law, wife, aunt and friend. Like her father, Harry Goebel, she echoed his loving, caring and generous traits that are found in too few people. Kristi was a beautiful, gracious, loving, selfless, kind person with a smile that made you feel like family even if you just met her and a hug that made you wish you were. Although she suffered many hardships and heartache during her life, she never took it out on others, while many others would have. She was a woman with a heart of gold who was loved by all. Kristi is survived by her mother, Kay Goebel; her siblings, Kathi Goebel, Dee (Diane) Goebel, Karen (Jim) Keith and Bart (Tracy) Goebel; her nephew, Jake (Shannon) Keith; her nephew, Grant (Cecelia) Goebel; her niece, Lexy (Jon) Sikes; and great nephew and great niece, Avery Keith & Ella Sikes; and her furry companion, Woody. Kristi was preceded in death by her husband, Warren (Mac) Oliver; and father, Harry Goebel. A celebration of life will be held at a later date. In lieu of flowers, we ask that donations be made to either the Arts Council of Oklahoma City by clicking the “Donate” button at www.artscouncilokc.com or Girl Scouts of Western Oklahoma at www.gswestok.org/donate or mail checks to 6100 N Robinson Ave, Oklahoma City, OK 73118.

The family of Kristi Lynn Oliver created this Life Tributes page to make it easy to share your memories.

Send flowers to the Oliver family.