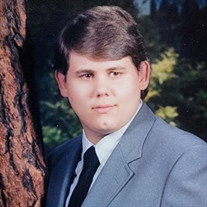 Kenneth Christopher Abt, 52, Guthrie, Ok resident, passed away on March 4, 2022 after a long battle with illness. Kenny was born on December 20, 1969 to Paul and Gisela Abt in Ft. Benning, Georgia. After Kenny graduated from Putnam City North High School in 1988, he went on to earn a Bachelors of Arts in Human Resources at Southern Nazarene University and went to work for the State of Oklahoma following graduation. He married his wife Shari Robinette in February 18, 1994 whom he remained devoted to until the end. Kenny was predeceased by Paul Abt (father), Ilse McCann (grandmother), John McCann (grandfather), and Clarence Bearden (grandfather). He is survived by Shari Robinette Abt (wife), Gigi Abt (mother), Peggy Hunnewell (sister), Riley, Tristen, and Chandler Hunnewell (nephews), Sawyer Hunnewell (niece) and Mickel McCann (Uncle). A memorial service may be announced at a later date. In lieu of flowers, the family requests donations be made to the National Kidney Foundation (www.kidney.org) or the National Diabetes Foundation (https://diabetes.org?diabetes/donation). Kenny was a devoted husband, brother, and son. He was a lover of history especially military conflicts. This makes sense considering he got his beginning as an Army brat born into this world at the Ft. Benning, Georgia Army Hospital. As a child, he would spend hours setting up his plastic green soldiers into perfect combat formation, only to have his annoying sister stomp through like Godzilla. He remained patient with her and would start over painstakingly trying to rebuild the devastation. Kenny was a brother in many senses of the word. To his sister he was a brother by definition: an annoying creature who is loyal, sometimes funny and sarcastic, but a forever friend. To his church he was a brother as a member of the Knights of Columbus. He believed in his faith deeply and tried to help others even when his own life was filled with adversity…putting homeless people up in hotels when he had little money to spare or driving someone across town. He had a huge heart and gave of it freely. His life has always been plagued with illness from early childhood on but through it all he loved his family and was always proud to share accomplishments of his nephews and niece with anyone who would listen. He loved to keep mementos of things he could attach a story to that reminded him of past events or pass on a family recipe to friends. He loved to talk and share his stories; this was his way of keeping the person alive by continuing to share their life with others. If you have a story to share about Kenny, please leave a post. His family would love to hear them. Your stories will help keep Kenny’s memory alive. "Jesus said, 'I am the resurrection and the life. Those who believe in me, even though they die, will live, and everyone who lives and believes in me will never die.' ” John 11:25-26

Kenneth Christopher Abt, 52, Guthrie, Ok resident, passed away on March 4, 2022 after a long battle with illness. Kenny was born on December 20, 1969 to Paul and Gisela Abt in Ft. Benning, Georgia. After Kenny graduated from Putnam City North... View Obituary & Service Information

The family of Kenneth Christopher Abt created this Life Tributes page to make it easy to share your memories.

Send flowers to the Abt family.