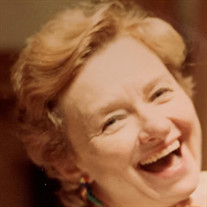 Kathleen A. Powell was born in her family’s home in Holdenville, Oklahoma to Thomas and Ferne Adams on August 28, 1925 and passed away on July 10th, 2019 in Epworth Villa, Oklahoma City at the age of 93 years old. As a teenager, Kathleen moved from Holdenville, Oklahoma with her father and step-mother Thomas and Bertha Adams and sister Lola to Pass Christian, Mississippi. Where she graduated from high school. Kathleen then went on to graduate from the University of Oklahoma with a Bachelors degree in Home Economics. She met John Coleman Powell Jr. and they married on August 28, 1945. They lived all over the United States and Europe with their daughter Pamela Freeman as a military family until the passing of her husband Coleman in 1969. Kathleen and Pamela then moved to Norman Oklahoma where she went back to the University of Oklahoma and received her Masters in Social Work in 1972. She went on to dedicated her career to helping children at Philsmalley Children’s Center, which was part of Central State Hospital in Norman, OK. Kathleen retired at the age of 62. She remained in Norman with her long time partner Bill Frisbee until his passing. In 2002, Kathleen moved to Epworth Villa, where she enjoyed playing bridge, swimming, and visiting with her many friends until her passing. Kathleen was a preceded in death by her parents Thomas and Ferne Adams, two sisters Velma, Wynona, one brother Albin, and husband Coleman. Kathleen is survived by daughter Pamela Freeman and husband and Lindsey of Carney, OK, Granddaughter, Krista Ellis and husband Greg of Chelsea, Oklahoma, Grandson, Taylor Freeman and wife Kelly of Carney, Oklahoma, five great-grandchildren, Coleman Ellis, Chloe, Layne, Hadleigh, and Karter Freeman, sister Lola Atkins of Columbus, Mississippi, And a host of relatives and friends that she dearly loved.

Kathleen A. Powell was born in her family&#8217;s home in Holdenville, Oklahoma to Thomas and Ferne Adams on August 28, 1925 and passed away on July 10th, 2019 in Epworth Villa, Oklahoma City at the age of 93 years old. As a teenager, Kathleen... View Obituary & Service Information

The family of Kathleen Powell created this Life Tributes page to make it easy to share your memories.

Kathleen A. Powell was born in her family’s home in Holdenville,...

Send flowers to the Powell family.