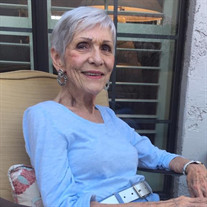 Karen Clause Bloomquist Strandberg passed away in her sleep on Thursday, August 15, 2019 after a months-long struggle with the debilitating disease COPD. Karen was a tremendously strong woman and fought it until the end when God brought her... View Obituary & Service Information

The family of Karen Clause Strandberg created this Life Tributes page to make it easy to share your memories.

Karen Clause Bloomquist Strandberg passed away in her sleep on...

Send flowers to the Strandberg family.