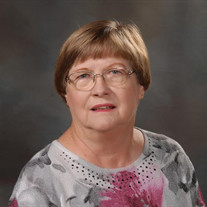 Julie Ann Wasson passed away on July 28, 2019 at the IRIS Memory Care Center in Edmond, Oklahoma. Julie was born on September 18, 1947 in Coolidge, Limestone County, Texas. Julie’s parents were William Warren Barham and Mary Beth DeMonney Barham. Julie grew up with fond memories of a childhood in Coolidge and a special understanding of the importance of family and friends. Mary Beth provided a strict, but loving home and raised a strong-willed and independent woman. Julie knew that Pappy (William Waldron DeMonney) and Grammy (Mary Leona DeMonney) her maternal grandparents were always there to contribute to a belief system based on love of God, love of family, and love of life. In 1960, when Mary Beth was diagnosed with a chronic illness, Julie at age 13 became the primary care provider to her four younger siblings. In spite of the challenges in Julie’s life she kept a smile on her face and in her heart. After graduating from Coolidge High School in 1965, Julie attended Navarro College in Corsicana and graduated from Sam Houston State University in 1968. Julie went on to a fifty-year career that included teaching, operating a boutique day care (The Other Mother), working with special needs children in the public schools, and various administrative positions in higher education at Blinn College and Texas A&M University. Julie and William Allen (Bill) Wasson were married on August 31, 1968 in Coolidge, Texas. Determined to raise a family in a small community, Julie and Bill moved to College Station in March of 1970. Thus, began a nearly 50-year relationship with the Bryan and College Station communities. With the birth of her two sons, Pat in 1971 and Jeff in 1975, Julie dedicated herself to being mother to her two boys. Julie expanded the role of mother to include any young person that came to her seeking advice and comfort. She was proud of the boy’s academic and athletic achievements, but Julie loved to think of her home as a place where every young person was welcome. In spite of her busy schedule, she was active in the Methodist Church, Daughters of the American Revolution; the Research Ramblers (Genealogy) and various social and athletic organizations too numerous to name. She shared her passion for Genealogy with friends, family, and anyone who was interested in family history. Family vacations were always time for fun, but often included visits to libraries, archives, and cemeteries. Every summer she planned a driving genealogy trip to explore and document her family lines. She never asked anyone to accompany her, but often would take an elderly family member that seldom got to travel. Julie’s family became accustomed to the annual trip to Salt Lake City to the Mormon Library. Her parents William Warren Barham and Mary Beth DeMonney Barham Gorden, her stepfather Burney Gorden, her grandparents William Waldron DeMonney, Mary Leona DeMonney, William Ernest Barham, and Mary Eulaha East Barham, her brother William Warren Barham and her sisters Tillie Jan Ashmore and Ina Rae Rickard, preceded Julie in death. Julie is survived by her husband of 50 years William Allen Wasson of Piedmont, OK; sons and daughter-in-laws, William Patrick Wasson and Kimberly Marchant, and Jeffery Allen Wasson and Rebecca Wasson, grandchildren Emma Kate Wasson and Cass Marchant, and great-grandson Duke Patrick Marchant. Julie will be honored at a Celebration of Life on the evening of Monday, August 12, 2019 from 4:30 to 8:00 PM at her favorite restaurant, Jose’s, 3824 S. Texas Avenue, Bryan, TX 77802. The family will have a private ceremony at a future time to inter Julie at her beloved Armour Cemetery in Coolidge, TX. Julie requested that any, who wished to gift flowers or charitable contribution in her memory instead consider contributing to the Chapel and Cemetery Maintenance fund in care of the Coolidge Cemetery Association, P.O. Box 84, Coolidge, TX 76635.

The family of Julie Ann Wasson (Barham) created this Life Tributes page to make it easy to share your memories.

Send flowers to the Wasson family.