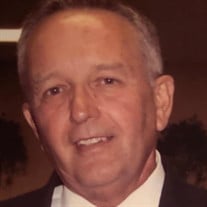 On October 9, 2021, after spending his last days at home - laughing, talking, and feeling the immense love of his family, James &#8220;Jim&#8221; Bryant Thompson signed off on a life of "seventy-six wonderful years." During his last days, he... View Obituary & Service Information

The family of James Bryant Thompson created this Life Tributes page to make it easy to share your memories.

Send flowers to the Thompson family.