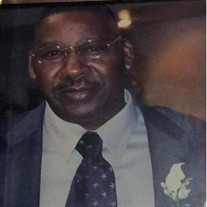 Sunrise: April 15, 1951 Sunset: January 13, 2022 James Shoals drifted away into eternal sleep on January 13, 2022 in Oklahoma City, OK after a long battle of health issues. James was born on April 15, 1951 in Hugo, Ok to the parentage of Levi Dunn and Elsie Shoals. He was the oldest of twelve children and was raised by his maternal grandmother, Willie Shoals. During his childhood, he participated and excelled in sports before graduating from Booker T. Washington High School in 1969. He went on to college and enlisted in the US Air Force. Upon his return he married Sherri Ann Roberts(Armstrong) and to this union two children were born. He lived in several areas of Oklahoma but Papa had bigger dreams. His taste for fashion and finer things led him to California, where he resided until he returned to Oklahoma in 2019. The love he had for clothes, shoes, Cadillac, California and Money was unmatched. He loved to go to the casino and play Poker, often times going until it was time for him to take his dialysis treatment. This love led him to request his ashes to be scattered over the casino. James will be greatly missed by all those who knew and loved him. James was preceded in death by his parents and two siblings, Elizabeth and Henry Wallace. He is survived by his children: Teresa Shoals of Duncanville, TX, Wendy Carrethers of Oklahoma City, OK, Darnell Shoals of San Jose, CA and Keisha Hendrix of Seattle, WA. Grandchildren: Justin(Melissa) Shoals of Arizona, Joshua, Jacob and Jonah Carrethers of Oklahoma City, OK, Jaydin Hendrix of Seattle, WA, and Miracle Shoals and Deasha Roberts of Duncanville, TX. Great Grandkids: Alania and Avery Shoals of Arizona. Sisters: Ruth Dorsey and Mary Marmon-Halm of Hugo, OK, Joyce Norris and Rosemary Richardson of Oklahoma City and Jackie(Tony) Ortiz of Killeen, TX. Brothers: Ahmad(Helene) Salahuddin of Orange Park, FL, Bro. Robert(Beverly) Wallace of Paris, TX, Alfred(Patricia) Wallace of Killeen, TX and Jerry Wallace of Hugo, OK. Special friends: Sharon Hightower of San Jose, CA and Kerry Fort of Hugo, OK. A host of nieces, nephews, cousins and friends. A service has not been scheduled at this time.

The family of James Irving Shoals created this Life Tributes page to make it easy to share your memories.

Send flowers to the Shoals family.