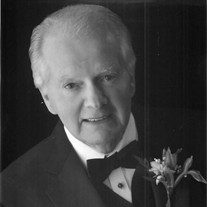 Memorial Service James Dwight Neel Friday September 18, 2020 at 1:00pm Epworth Villa 14901 N Penn Ave Oklahoma City, Oklahoma ******MASK IS REQUIRED****** James D. Neel, formerly of Bartlesville and Tulsa, and most recently of Epworth Villa, Oklahoma City, passed September 10, 2020 at the age of 78. Jim was born in Kansas City, Missouri, April 15, 1942, and raised in Bartlesville. He spent his business career in Tulsa, first with the First National Bank and Trust Company where he served in the Executive Financial Center as an Assistant Vice President and Lending Officer. After taking early retirement, he eventually joined Merrill, Lynch, Pierce, Fenner and Smith. After four years, Jim again retired early and spent the next nine years as a full-time father to his two sons, James Harrison Neel, MD, and James David Neel, MD, both graduates of the OU School of Medicine. Son, Jim, is a Cardio-Thoracic Surgeon at St. John Hospital in Tulsa and son, David, is a Vascular Surgeon at Integris Hospital in Oklahoma City. Jim graduated from Bartlesville’s College High School in 1960. After graduating from OSU’s Business School, he joined the U.S. Air Force. From his early retirement at the age of forty, Jim fulfilled his dreams and occupied his time with deep sea charter boat fishing, as well as fresh water and fly fishing. He also enjoyed hunting duck, goose, deer and elk, passing along these loves to his two sons who are also avid hunters and fishermen. Jim is blessed to have two daughters-in-law: Ashleigh, a specialist in education and Gwen, an OB-GYN and seven grandchildren: Ahni, Hudson, Asher, Emme, Jacob, Ellie and Piper. The former Janice Devling Taylor and Jim were married on July 25, 2013 while cruising Alaska aboard Holland America’s Statendam. Jim and Jan had many cruises during their years together, including several to Rome and to Alaska, the Panama Canal, Greek Isles and trans-Atlantic. Jim enjoyed living life to its fullest and living it his way.

The family of James D. Neel created this Life Tributes page to make it easy to share your memories.

Send flowers to the Neel family.