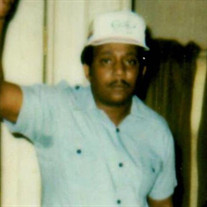 Good-bye Soul Man James Ervin Merriweather October 5, 1952 - November 3, 2020 James Ervin Merriweather came into this world at 11:08 am on October 5, 1952. His loving parents were James Merriweather of Clarksdale, Arkansas and Rosebud Haggins-Merriweather of Luther, Oklahoma. Both parents are deceased and my brother Mark left way too soon. The first microwave oven was discovered in 1952. It was the size of a refrigerator and cost $1,200.00 1952 A family could buy a house for less than $8,000.00 Average income was $3,515.00 A New Car was $1,700.00 A gallon of milk was 96¢ A gallon of gas was 20¢ A loaf of bread was 16¢ A postage stamp was 3¢ A turkey was 53¢ per pound Grieving gives us time to heal Comfort now another and hold each other more closely. Share fond memories and maybe shed a tear or two. Each day the sorrow will fade away a little more. Every now and then a thought of me will come to mind and those memories will remain forever. Me and Mrs. James Ervin Merriweather In 1985 I became a quainter with a young lady named Matlina Akers with big pretty legs. With permission from her parents, Mr. & Mrs. William Akers of Chatham, Virginia, Matlina and I stood before a judge and became man and wife. She gave up her job at American Furniture Co. and began a new life with me here in Oklahoma City. She started popping out baby boys. I knew I had a treasure. In service to my country At an early age, I started down the wrong path. It was my uncle Alonzo Cooper of the Oklahoma City Police Department who suggested I join the military. They accepted me on July 16, 1970 and I served in the US Army in Vietnam until I was honorably discharged on March 21, 1972. My cousin Geral Jones Man, I sure have missed our talks. We could go on for hours and hours about who just got out of the penitentiary and who just went back. We would laugh and laugh and then Mae would be ready to go. And we had to say good-bye til next time. You are the best. We got out of Stringtown and didn’t look back. The Children I may not have gotten a lot of things right, but I feel like my greatest work was raising my two boys. I didn’t want to slight either one so I named them both after me - James Ervin Merriweather Jr. and James Ervin Merriweather III. If George Forman could do it, I could too. And I did not forget my daughter Kelly R. Merriweather. My Sisters Mrs. Beverly Johnson and her sons Rober Jr and Anthony. When I see her coming I know she needs a couple of dollars. Andrea Darnell Quinn (Peaches) who up and left right after I go married in 1987, and her son Mark and daughter Demetria. Mrs. Rosemary Nelson who I always tried to by her some outside food so she wouldn’t have to eat that country stuff Rosebud was always cooking. Her daughter is Myrna Easom. Rosemary was a fighter and hung in there as long as she could.  i think she was missing mamma. Mrs. Jackie Williams - so faraway in Atlanta. But when I knew you were coming I was on my way to get you. My brother-in-law Eddie is a good man. My niece Jana grew up so fast and is a wife and a mama too now. Ms. Diana Davis - I don’t know how Mama and that nigga Daniel did it by they gave me a baby sister in their old age. She has a boy named Devon. I want you all to think about me sitting on a dock somewhere. The waves are splashing. I am waving at folks I don’t even know as they cruise by in their boats. I am looking back to what at y’all because I’m drifting away. Going on back to the 70’s. i was in a lot less pain then and I could hear and see. And I made a lot less mistakes. I am truly at pease now. I am listening to Ottis Redding and signing along to “Jail House Rock”. I guess I will give up smoking now. Hopefully when I get where I’m going, there won’t be any need for smoke, cigarettes, lighters or matches. Love Always… From a son, brother, husband, daddy, uncle, cousin and brother-in-law. “Jug” “It is finished” - John 19:30 No more debt owed by man. No more sin. As fare as the east is to the west, it is done, signed, and sealed, because of the blood of Jesus. The family acknowledges Edward Jones as caregiver…. Thank you!

The family of James E. Merriweather created this Life Tributes page to make it easy to share your memories.

Send flowers to the Merriweather family.