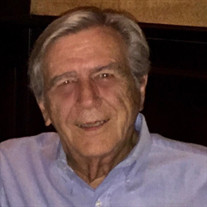 James Larry Burrus (“Larry” to those who knew him) died at 12:24 am on April 22, 2019 in Oklahoma City, Oklahoma, after a long struggle with cancer and a recent stroke. Born in Holdenville, Oklahoma to Doyle James Burrus and Viola Ghigo on April 2, 1942, Larry was the oldest of three children, survived by his brother John Edward and sister Peggy Rea. He graduated from Northwest Classen High School in 1960 and then served his country in the Air National Guard. On August 7th, 1965, he married Beth Ann Richards of Crescent, Oklahoma. They enjoyed fifty-three years together, adopting two beautiful children, Leann Kaye in 1972 and Ryan James in 1974. Known for his intelligence, stoic nature, and baritone voice (hearing him sing “Sixteen Tons” was a delight), Larry worked long hours and travelled the world in his management role at a major international electronics manufacturer. He expressed his love by providing for his family and giving every opportunity he could for his wife and children to experience, grow, and learn both in and out of the home. Always one to help someone in need, he was a good man, a dependable and reliable friend, and touched the lives of those around him in myriad positive ways. He explored his love of working with his hands, electronics and mechanics by collecting and restoring classic cars (such as his 1940 Ford convertible and 1938 Ford pickup) and miniature world-building with model trains and cars. Through his daughter Leann and son-in-law Terry Sigle he welcomed three grandchildren into this world, taking great delight in his role as loving Pop to Landon, Gracyn, and Holden Sigle, whether it consisted of hugs, telling them funny stories (he was a wonderful storyteller; his “The Enemy is Watching” story was always a favorite), or playing chess. A memorial is to be held at 2537 Loblolly St., Edmond, Oklahoma, on May 4th 2019 at 1pm.

James Larry Burrus (&#8220;Larry&#8221; to those who knew him) died at 12:24 am on April 22, 2019 in Oklahoma City, Oklahoma, after a long struggle with cancer and a recent stroke. Born in Holdenville, Oklahoma to Doyle James Burrus and Viola... View Obituary & Service Information

The family of James Larry Burrus created this Life Tributes page to make it easy to share your memories.

Send flowers to the Burrus family.