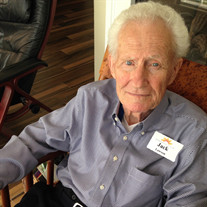 Jack Parker Lawson, 85, formerly of Marietta, Georgia, passed away November 16th at Epworth Villa retirement community in Oklahoma City, Oklahoma. Born October 12, 1934 in Paterson, NJ, to Parker R. and Theresa McCarthy Lawson, the family moved to Johnstown, Pennsylvania where Jack grew up. He graduated from Westmont-Upper Yoder High School in 1952. He attended the University of Pennsylvania where he graduated from the Wharton School of Finance and Commerce in 1956. At Penn, he was a member of the Friars Senior Honor Society, Phi Beta Kappa, and president of Phi Delta Theta fraternity. Jack entered the U.S. Air Force following college. During his 22 years of service in the Air Force Audit Agency, Jack had assignments in Japan, Pakistan, and multiple stateside locations. He received the Meritorious Service Award and Air Force Commendation Medal w/1OLC.He was chosen for the Air Force Institute of Technology program where he received his MBA from Michigan State University in 1965. He later passed the CPA exam at first sitting in 1977. Jack retired from the USAF as a Lieutenant Colonel in 1978. Following military service, Jack worked in accounting management positions for RJR Nabisco, Inc. in Winston-Salem, NC, and Atlanta, GA. Jack volunteered extensively, sharing his time and talents with the Service Corps of Retired Executives for ten years, as counselor and supervisor with the AARP Tax Counseling for the elderly for twenty years, and with the Cobb Family Resources food pantry in Atlanta for twenty years. Jack received the United Way Heart in Hand award for volunteerism in 2004. Jack was a husband and father of integrity and devotion, and enjoyed tropical fish and gardening. Jack is survived by his wife of 55 years, Doris Griesbach Lawson, of Dover, Delaware, sons Dwight Paul Lawson of Oklahoma City, OK, and Allan Parker Lawson of Arlington, MA. He is also survived by daughters-in-law Rebecca Snyder and Marina Lawson, three grandchildren, Daniel, Timothy and Rory, and his sister Mary Alice Marley of Fleming Island, FL. Jack was buried with military honors at Fort Sill National Cemetery, OK. In lieu of flowers, donations may be made to The Center for Family Resources, 995 Roswell St, NE, Suite 100, Marietta GA 30060.

The family of Jack P. Lawson created this Life Tributes page to make it easy to share your memories.

Send flowers to the Lawson family.