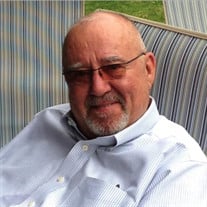 Glenn Carroll “Cougar” Perry passed away peacefully at his home on Monday, August 24, at the age of 73. He was born on October 20, 1946 in Roswell, NM to John Sherman and Nina June (Elam) Perry. Glenn enlisted in the United States Army in 1967, where he completed active duty training and was then transferred to the Army Reserve. He married Beverly Draper in 1969, and they welcomed a daughter, Keli Rene on April 23, 1970. Glenn met Anne Adele Landrum in 1976, and they were married in 1978. On July 29, 1979, Glenn welcomed his second daughter, Niki Rene, with Anne. Glenn and Anne lived in several cities before settling in Edmond, OK, where they have lived for almost 30 years. Glenn was always cracking jokes and making everyone laugh with his sharp wit and quick comebacks. He loved being with his family – spending time on the lake, boating, or just floating in the water. He especially enjoyed spending time at Lake Ellsworth in Elgin, OK. Glenn also loved to fish, and he taught his oldest grandson, Will. He also liked to go shooting at the range and hone his Sharpshooter status he earned in the Army. When he was able, his favorite pastime was to ride on his Harley. As of late, he loved spending time with and spoiling his dog, Popi. She was his sidekick and little girl. Glenn is preceded in death by his father, John, his mother, Nina, whom the family lost this July; and his older brother, Johnny. Glenn leaves behind his beloved wife of 42 years, Anne, who has been his caretaker; his daughter Keli Page, and her son, William Mark Gibson; and his daughter, Niki, her husband, Mike, and their son Radek Glenn Leonard. Glenn also leaves behind his brother, Steve and his wife Sandy of Tuttle, OK, their four adult children, and their families; his sister Connie and her husband, Ross, of Roswell, NM, and their two grown children and their families; and his sister, Trudy and her husband, Bob, of Edmond, OK, and their twin sons. In lieu of flowers, the family has asked donations be made to Mercy Health Foundation of OKC, Hospice Care, or to a favorite charity in Glenn’s memory.

Glenn Carroll &#8220;Cougar&#8221; Perry passed away peacefully at his home on Monday, August 24, at the age of 73. He was born on October 20, 1946 in Roswell, NM to John Sherman and Nina June (Elam) Perry. Glenn enlisted in the United States... View Obituary & Service Information

The family of Glenn Carroll "Cougar" Perry created this Life Tributes page to make it easy to share your memories.

Glenn Carroll “Cougar” Perry passed away peacefully at his home...

Send flowers to the Perry family.