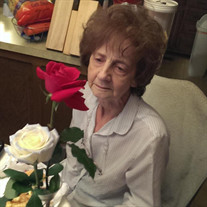 Geneve Lett Butler "Sister" Born June 13th 1935 in the middle of the Great Depression and Dust bowl . To Farmer/Rancher Roy Lett and his wife Cleo (Emmons) Lett On a Farm in mountain park/ Snyder Oklahoma area Kiowa county. Geneve grew up in an age of wash tub baths sharing the water, flour sack dresses and outhouses. Road a horse to school with her Brother Leroy in the one room Richardson school house. She milked cows , picked cotton, tended chickens. grew and raised their own food. In an era of little comforts but much love and independence. Where the requirements to pass the 8th grade could not be met by many of today’s college graduates. Attending Snyder Baptist church with faith in Jesus Christ her lord and savior. She graduated from Snyder High school in 1953. with a HUGE class of 30+ including friends she would keep for life, Joyce Jimison Knott and Frances Coleen Rogers , she attended their high school reunions for many years even participating in the centennial homecoming parade as 1953 Homecoming Queen. In the last few years her health kept her away, but she followed the events via social media. Geneve moved to Oklahoma city a few years after Graduation and went to work for GE then OG&E and then Pan American Petroleum (later Amoco) as a Key punch operator. She Moved into an upstairs garage Apartment with her one of her friends. This is where she would meet her future husband of 52 years James Paul Butler who lived with his parents downstairs. They would date for several years while he was in the army stationed at fort sill where she would travel every weekend to see him. Marrying October 13th 1962 and moving to their new home in the village in Oklahoma City. Adopting their only child Brad in 1967. She would continue to juggle work and take care of the home and their son all the while, even when they moved to Edmond Oklahoma in 1976. She and Paul would have quite a social life during those years spending time with numerous friends and neighbors including Paula and Charlie Nicholson and the McFalls Bill and Jeanine. Ron and Nancy Organ, and later in Edmond Tom and Linda Simonson across the street. And next door their wonderful neighbors Sherry and Dennis Clark all whom she loved dearly. She and Paul Involved themselves in their sons life and interests, raising him in Christ and seeing that anything he showed interest in he had the opportunity to pursue , many times at great personal sacrifice, seeing that he experienced life on the farm with his grandparents every summer and life at his grandparents’ Home interiors business, God FAMILY and Country was always the key. she enjoyed attending his dance and piano recitals and specifically the Edmond Band Boosters and all it entailed traveling to every competition and trips throughout his High School experience becoming friends with the parents also involved with the boosters, Laclida Cocklin, Betty Land, Ikey Orrick to name a few. Her son thinks there were many times they enjoyed the experiences more than the kids. She continued to work throughout her life spending time at Montgomery Ward in Penn Square and Ross stores to name a couple, where she made lifelong friends, including her two fellow musketeers Myrna and Sharron. And her buddy Jerry. As she grew later in life she retired and concentrated on running the household, enjoying cooking and trying new recipes, growing tomatoes and “begonias” in her garden and learning how to “internet”. In her last years she was diagnosed with several ailments including cancer which she beat. And in the end COPD, but she never let it limit her and was able to stay in her own home until the very end where she passed peacefully, on Friday September 4th 2020 after a yearlong illness, with her son and cat Marco by her side. 85 years of a life very well lived, experiencing it to its fullest and sharing her love with all she met and knew, fiercely independent until the very end and happy, with no regrets to speak of. Geneve is preceded in her home going by her parents Roy and Cleo Lett, Brother Leroy Dale Lett, Husband James Paul Butler, Parents In law W Van and Helen Marita Butler, a Nephew Marvin Jarrell Lett. Brother In law Veldon Morrow and many aunts, uncles and cousins. She is survived by, her Son Brad Butler of Edmond, Sisters in law Iletta Lett of Snyder and Charlene Morrow of Edmond, Nephew Bruce A. Lett and his Wife Tennnie of Mountain Park, Nieces Julie L. Morrow Sykes and Husband Sven of Kansas City and Vicky J. Morrow Wedel and Husband Todd of Edmond. Grand Nephew and Nieces Steven D. Sykes of Abroad, Jessie K. Sykes of Steamboat Springs, Kristen (Kiki) H. Sykes of Somerville and Emalee E. and Hannah M. Wedel of Edmond and many other relatives and Friends. A Celebration of Life Memorial will be Held Sunday October 25th 2020 at 2 pm with reception to follow at: Castle Falls , Grande Hall https://castlefalls.com/ 820 N MacArthur Blvd, OKC, OK 73127 Questions? Please call 405 640 0320 All are Welcome Condolences may be expressed online at www.CorbettFuneral.com or in person at Corbett Funeral and Cremation, 807 W Wilshire Blvd, Oklahoma City, OK 73116.

The family of Geneve (Lett) Butler created this Life Tributes page to make it easy to share your memories.

Send flowers to the Butler family.