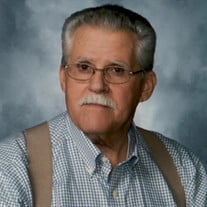 Gary Dean Phillips, 86, of Oklahoma City, passed October 25, 2021. Mr. Phillips was born July 29, 1935, in Cave Springs Arkansas, to Colet and Ruth (Price) Phillips. Raised in Arkansas, California, and Oklahoma, he graduated from Central High School in Oklahoma City, and attended the University of Oklahoma. Gary served in the United States Army spending time in Fort Bliss, Texas and Fort Huachuca, Arizona. In 1955 Gary married the most beautiful woman he had ever seen, Janie Lee McDowell. They had two sons, Scott Alan and Jeffery Dean. Gary joined the Oklahoma City Police Department in 1957 and retired in 1978. He went on to work and retire from Oklahoma Peterbilt Trucks, Friendly Bank, and the Oklahoma Medical Research Foundation, 2016. He enjoyed telling a good story, fixing things, John Wayne movies, riding motorcycles, and teasing his family and friends, all whom he cherished and loved deeply. Gary was proud of his service in the Army and his time in law enforcement. He was a Veteran and a Mason. The “fun one,” Gary was affectionate, witty, everyone’s favorite, and always “Handsome, dashing, and debonaire. And not conceded.” Or so he said. Gary is survived by his loving wife; two sons and their spouses, Kay and Rebecca Phillips; five grandchildren Rachel Wilhelm, Katy Liddick, Cortney Smith (Trent), Blair Mask (Blair), Beau Phillips (Rebecca); and six great-grandchildren. He is preceded in death by his parents and brothers Glenn and Bill Phillips. Services will be held at 11 am Saturday, November 13, 2021 at Memorial Christian Church, 1915 N Meridian Ave, Oklahoma City, OK 73107. In lieu of flowers, donations may be sent to Memorial Christian Church.

The family of Gary Dean Phillips created this Life Tributes page to make it easy to share your memories.

Send flowers to the Phillips family.