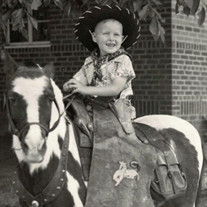 It it with sad hearts we share the news that our beloved Papa, Gary Dean Clinkenbeard of Edmond, OK, has passed on to his eternity. He left this world peacefully at his home in Edmond the evening of March 2, 2019, and was surely received into Heaven with joy and open arms. He will be missed as much for his singing of hymns and love of family and grandchildren as his never failing love and joy of our Lord. He was an avid lover of horses and all animals. He took great pleasure in visiting with his friends and family, meeting new friends everywhere he went. If you had known him for more than a minute, you may have called him "Clink". He was well known for his happy response to your arrival with an, "I'm better now that you're here!" Papa, we were better too. Gary was born and raised in Oklahoma City. He graduated from Crooked Oak High School in 1963. He married his "orchid", Susan, on Nov. 3, 1990. Due to his unwavering character, he spent his adult years as an accomplished salesman, helping raise Susan's two daughters, and tirelessly serving in the church, even becoming ordained. He was a blessing to the many he performed wedding ceremonies for, including his oldest daughter, Elizabeth. He is survived by his wife, Susan of Edmond, a daughter, Elizabeth Zeigler of Edmond, husband, John, and 4 granddaughters, a daughter, Heather Tipton of OKC, her husband, Brandon, and 3 grandsons and granddaughter, a brother, Bobby Hall of OKC, a sister, Kimi Hatfield of OKC, her husband, Danny, and 3 children, a sister, Becky Tanner of Moore, OK, her husband, Junior, and 2 children, a brother, Chris Holliman of Chapman, Kansas, wife, Kathy, and 3 children, a brother, Tyler Holliman of Mustang, OK, and 2 children, and a dear cousin, Sharon Osborne-Tisdale of Edmond, OK. He is preceded in death by his mother, Belle Holliman Goins of Rudy, AR, and grandparents, Sam and Ola Mae Clinkenbeard of OKC. We have been loved by Gary and loved him in life. Let us not forget him in death. We heartily believe if Gary could visit with you again, he would say, "God loves you and so do I.” Gary Dean "Clink" Clinkenbeard May 12, 1945 - March 2, 2019.

It it with sad hearts we share the news that our beloved Papa, Gary Dean Clinkenbeard of Edmond, OK, has passed on to his eternity. He left this world peacefully at his home in Edmond the evening of March 2, 2019, and was surely received into... View Obituary & Service Information

The family of Gary Dean Clinkenbeard created this Life Tributes page to make it easy to share your memories.

It it with sad hearts we share the news that our beloved Papa,...

Send flowers to the Clinkenbeard family.