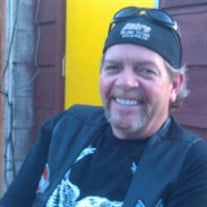 Gary Wayne Allen, 60, of Norman, Oklahoma, passed away on May 2nd, 2022. He is proceeded in death by his father Gary Eugene Allen. Gary Leaves behind his mother and stepdad Bobbie and Leigh Moseman, His brother William Eugene Allen, His Son Dustin (Dusty) Allen, his daughter Amanda Allen and spouse, 7 Grandchildren and the love of his life Rhonda Allen. Gary also leaves behind His Best Friends-Brothers and their families. Bobby and Cheryl Lowry and family, Ronny & Sherri Dallas and family, Aaron & Christy Lejeune and family, Kevin and Bunnie York and family. As well as numerus other close friends and people he called family. Gary Allen was Born in Anchorage, Alaska on September 5th, 1961. His family moved to West Melbourne, Florida where he attended West Palm Beach Highschool. Gary Married Rhonda McGhee in 1991 and together they would have two amazing children Dusty and Amanda. Gary was an active member of Ride Oklahoma Charities. He was an essential team member of Believe the Hype pool team with the American Pool Players Association. Gary’s hobbies included, riding his bike on the open road, fishing, attending car shows, playing pool, visiting the island where he enjoyed playing Golden Tee with his friends. He enjoyed working on race cars and attending races across the United States. Gary treasured time spent at cookouts and gathering with his friends and family. Gary’s true love was his commitment to RGB Racing. He was a huge part of what RGB Racing came to be. RGB Racing began with three remarkably close friends. Ron, Gary, and Bob. In 1991, Bob said, “I can drive” Gary said, “I can twist wrenches” and Ron said, “I think we can make enough money to put a car together” and just like that RGB Racing was born. Throughout the years RGB Racing continued to grow and become bigger than they could have imagined. They went on to win multiple big money races, season points championships and countless weekly show races. They ran every car class you could think of from Factory Stocks to Asphalt Trucks and were successful at all these endeavors. RGB Racing was a team to be reckoned with in the racing community. Their final race season at Lawton Speedway running Limited Modifieds was one we will treasure forever. The dynamic trio’s slogan became “The Boys are Back in Town”. RGB went on to race Mini Mods at I-44 Speedway winning the season Championship. While racing the Mini Mods they received the opportunity to compete at the Tulsa Shootout. Gary spent countless hours preparing for this race. Together they fielded nine cars that only ran because Gary had his hand on each of them. Gary was constantly ensuring every inch of the car was safe and ready for the race. Gary made it a point to always tighten Bob’s belts, and give him the assurance the car was ready to hit the track before every race. Bob Put his life in Gary’s hands every time he got behind that wheel and never thought a second about it. They had each other’s backs around all four turns. One of Gary’s most prized possessions was his RGB Racing shirt with his name printed on the sleeve. Through all the success and missteps one thing remained constant, those three friends never ending commitment to each other and each other’s families. Gary Allen will forever be known as a champion. He was a true example of a best friend. His loyalty and commitment never faltering. Gary will be missed dearly by all of the lives he touched and will live on through the love and relationships he built throughout his time with us.

Gary Wayne Allen, 60, of Norman, Oklahoma, passed away on May 2nd, 2022. He is proceeded in death by his father Gary Eugene Allen. Gary Leaves behind his mother and stepdad Bobbie and Leigh Moseman, His brother William Eugene Allen, His Son... View Obituary & Service Information

The family of Gary Wayne Allen created this Life Tributes page to make it easy to share your memories.

Gary Wayne Allen, 60, of Norman, Oklahoma, passed away on May...

Send flowers to the Allen family.