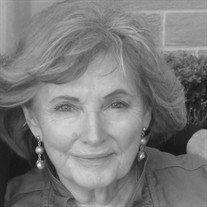 Not sure what to send?

Dorothe June Miller, known as Dottie, was born June 29th, 1933 in Scottsbluff, Nebraska. Dottie was the 6th and youngest daughter born to Russian immigrant parents and most of her early life was spent on her parent’s farm in Nebraska. Following in her sister’s footsteps, she attended the University of Nebraska. After college, she went on to work for the FBI and as a flight attendant for American Airlines, a job that would take her to Tulsa, OK and lead her to the love of her life, Robert “Bob” Miller. Dottie married Bob in 1955 and over the course of their life together they lived in Tulsa, Ardmore and Norman. Together they raised 3 spirited, strong-willed and competitive children that would later grow her family by giving her 6 grandchildren and 6 more great grandchildren. Dottie was a world traveler and loved history, especially her family’s history and the hardships and struggles they endured which caused them to immigrate to the USA. Her experiences and family history developed a deep sense of patriotism for America. She served diligently for the Republican party and believed it was an honor and privilege to vote. But first and foremost, she loved her family. Dottie was patient, kind and full of grace. Preceding Dottie in death are her mother, Mary Kaufman of Scottsbluff, Nebraska, Robert “Bob” Miller, her beloved husband, her sisters, Esther, Lillian, Mary Ann, Norma Jean, Betty and brother Kenneth and her grandson Zac Stice. She is survived by her three children, Jeff Miller and his wife Kathy of Norman, Oklahoma, Joni Stice of Oklahoma City, Oklahoma and Jim Miller and his wife Julie of Edmond, Oklahoma. Dottie is also survived by her wonderful grandchildren: Jared, Tanner, Andrea, Robbie, Haidee, Laura, Rachel, Amanda and Jordan and her great grandchildren Beckett, Chase, Lincoln, Reagan, Morgan, and Hadley. A very special thank you to the staff at Epworth Villa especially Courtney, Marla and Adrian for their exceptional care and love.

Dorothe June Miller, known as Dottie, was born June 29th, 1933 in Scottsbluff, Nebraska. Dottie was the 6th and youngest daughter born to Russian immigrant parents and most of her early life was spent on her parent&#8217;s farm in Nebraska.... View Obituary & Service Information

The family of Dorothe June Miller created this Life Tributes page to make it easy to share your memories.