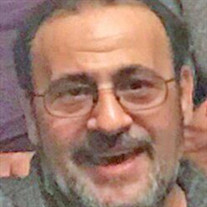 David Gerard DeAngelo, 64, passed away November 5, 2020. He was born June 28, 1956, in Utica, N.Y. to Congetta (Chiffy) and James DeAngelo. In 1966, David's family relocated to Oklahoma City, OK where he graduated from Putnam City West High School in 1974. David began working for the Franz Tool Company as a machinist right out of high school and remained there for 20 years. He left there and worked for Candid Color as a photographic dark room technician for another 20 years and eventually retired in 2019 from Hobby Lobby. In 1995, David married the love of his life, Carol A. Tash, of Oklahoma City. David and Carol enjoyed traveling around this beautiful country, hiking, and visiting national parks. His skill of taking photos allowed him to share the beauty he saw with others. When he learned family and friends were planning a trip, he enthusiastically shared his experiences, itineraries, and the amazing sights to be seen. Another passion David had was listening to music, accumulating an extensive vinyl record collection especially from the 1970s. It was in David's early years he developed his lifelong love of sports. From playing football to baseball to swinging a golf club with his brothers or later in life watching with pride his grandchildren excel in their choice of sports activity. He became an avid Syracuse Orangeman and Washington football fan along with being a stout Baltimore Oriole baseball fan. Everyone who knew David loved and admired him for being a caring, loving and devoted family man. His infectious smile, boisterous laugh and good-natured spirit endeared him to all who knew him. David's outgoing personality had such a disarming quality about it that it is safe to say that he never met a stranger. David lived his life to the fullest and had the deepest love for his family. David was preceded in death by his loving wife, Carol DeAngelo (2007) and mother, Congetta DeAngelo (2017). He is survived by his father, James DeAngelo Sr. of Oklahoma City; brothers, James Jr. (Elaine) of Cabot, Arkansas; Ronald (Laurie) of Manassas, Virginia; Donald (Lisa) of Richardson, Texas; step-son Michael Grigsby Sr. (Shelly) of Midwest City; three grandsons, Michael Jr. (Tessa), Brenden, and Jesse; two great-granddaughters, Lizzie and Emma; as well as two nieces, one nephew, and a host of extended family and friends

The family of David Gerard DeAngelo created this Life Tributes page to make it easy to share your memories.

Send flowers to the DeAngelo family.