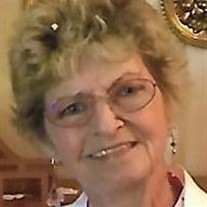 Darlene Ruth Hawes was born on February 15, 1957, in Oklahoma City, to Franklin and Coleen Bundy, the fourth of their six children. She went to West Nichols grade school, Hoover Jr. High School and Northeast High School. She married Rick Grady in 1974 and they lived in Oceanside, California, while he was in the Marines. They had one daughter, Heather. Later Darlene married Chuck Hawes in 1980. They had one daughter, Ashley. Over the years Darlene lived in Oklahoma City, Dallas, San Diego, and Mountain Home, AR. She worked as an eye technician for eye doctors for a few years until she had a brain tumor in 2004. She had a successful surgical removal of the brain tumor, but was unable to return to that kind of work due to other complications. In the last few years she loved working with children at the Village Montessori day care. Darlene was a friendly and outgoing person who loved talking with people. She enjoyed football (especially the Oklahoma Sooners), loved gardening and enjoyed collecting miniature clocks. She would often reminisce about adventures she had in San Diego, like offshore boating and fishing. She was independent and feisty at times, but she was a very kind-hearted person who would always help anyone if she was able. When our father became ill with Alzheimer’s and it was becoming more and more difficult for our mother to care for him, she moved in with our mother to aid in the care he needed. She faced adversity with more strength than most people would have with the health issues that she had. We loved Darlene and will miss her very much. She was predeceased by her father, Franklin Bundy, and her first husband, Rick Grady. She is survived by her mother, Coleen Bundy, sister Debby Richardson (Gary), brother Dennis Bundy (Lynn), sister Diane Shelton (Cecil), brother Darrell Bundy (Barbara), brother Danny Bundy, daughter Ashley Benton (Kurt) of Summerville, SC, and daughter Heather Roberts of Yellville, AR. She also had a special place in her heart for all of her grandchildren - Tristan Payton, Morgan Roberts, Briten Roberts, Brody McDowell, Kane Benton, Kole Benton, great granddaughter Emerson Payton, and several nieces and nephews including Andrea Marie Hembree, Melissa Diane (Roy) Bassett, and Scott Richardson, great-nephews Hezekiah Christian-Shelton-Bassett, Nicholas Bassett, Dalaan Bassett, Seth Richardson and Rachel Richardson. There will be a come-and-go reception for friends and family at Debby’s house on Saturday, December 21, from 12:00 P.M. to 3:00 P.M. Please contact the family if you need directions.

The family of Darlene Ruth Hawes (Bundy) created this Life Tributes page to make it easy to share your memories.