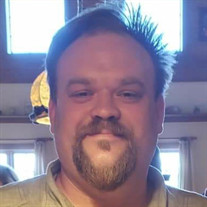 On Sunday, August 29, 2021 Daniel Martin Miller, loving companion and father of four children, passed away at the age of 39. Daniel was born April 9th, 1982 in Oklahoma City, Oklahoma to Leslie and Tresa Gail (Shannon) Miller. He graduated high school from John Marshall in 2001. After high school he went to trade school for auto-mechanic. He worked for Firestone Bridgestone for Ten years as a lead mechanic. On October 6th, 2002 he married April Dawn Bay. They raised four daughters, Madison, Kaylee, Anna, and Elaina. Daniel had a passion for hunting. He also loved to fish and camp. He combined these hobbies by showing and teaching his daughters these life skills. He was known for his joyful personality, his infectious smile, and his kind and compassionate spirit. Daniel is preceded in death by paternal grandfather Melvin Miller, and maternal grandparents Gaylon and Anna (Casey) Shannon, and son Hunter Daniel Miller. He is survived by separated wife April and companion Linda Bishop, his four children Madison, Kaylee, Anna, and Elaina, his brothers Jonathan and Steven, and sister Julie, several cousins, nieces, and a nephew. A funeral service will be held 2:00 P.M. Thursday, October 7th, 2021 at Corbett Funeral & Cremation. Viewing at 1 o’clock p.m. Flowers or donations may be sent to 807 W. Wilshire Blvd. Oklahoma city, Ok 73116.

The family of Daniel Martin Miller created this Life Tributes page to make it easy to share your memories.

Send flowers to the Miller family.