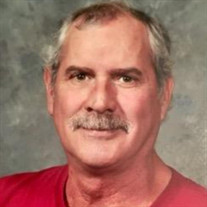 Craig Raymond Stobbe finished his earthly journey on August 15, 2020, at 59 years of age, in Oklahoma City, Oklahoma. He was prepared to meet Jesus, whom he had accepted as Savior. Craig was born to Raymond and Glenda Stobbe in November of 1960 at Edwards Air Force Base (AFB) in California. He was the youngest of three children. The family moved frequently during Craig’s childhood. They lived on Hickam AFB in Hawaii; at Edwards AFB in California (twice); in Burkburnett, Texas (Sheppard AFB); in Fairfield, California (Travis AFB); and, finally, Altus, Oklahoma (Altus AFB), where they settled in 1972. Craig attended junior high and high school in Altus, where he was involved in summer baseball, speech competitions, student council, newspaper staff, television production, varsity choir, and drama. He was president of the junior class and played the male lead roles in Our Town and Hello, Dolly! Craig was consistently on the honor roll and in the top ten percent of his class. He graduated with the Altus class of 1978 and retained friendships with his classmates for the rest of his life. His two years of experience in ACTV (Altus Cable Television), a student-produced city-wide broadcast, sparked his interest in a career in television, so after high school graduation, Craig studied broadcast journalism at the University of Oklahoma. He then spent his younger adult years working as a master control operator for television stations in Oklahoma City: KOKH (FOX), KOCO (ABC), and KFOR (NBC). When the big screen was installed at Owen Field, Craig became one of the first crew members for SoonerVision. As a weekend employee of SoonerVision each fall, he was on the sidelines for every University of Oklahoma home football game for over sixteen years and shot half-time shows for the fans to see on the big screen. From 2002 through 2016, Craig worked weekdays for Casters of Oklahoma, where he became the manager of the Oklahoma City store. Craig’s final “semi-retirement” job was his favorite, though. He became part of the Edmond Memorial High School support staff as a gate guard in 2017. Getting up at 5 a.m. every morning when school was in session, he was there by 6:30 to greet parents, staff members, and students. He took the time to learn names and the interests and extracurricular activities of the students. He could remember, as well, to whom a vehicle belonged when it was sitting in an off-limits parking spot! When there was a story about a student in the paper, Craig would cut it out and take it to them. He always smiled and waved at every person who entered the campus through his gate. He married Dana Litsch (née Wiginton) on May 29, 2010, at the Arbuckle Wedding Chapel in Davis, Oklahoma. They enjoyed each other’s company and were always content to be at home together with their rescued dogs and cats. Craig and Dana often attended Edmond Memorial ball games, concerts, and plays. Both lives were enriched by the friendships they made with students and their parents. Craig is survived by his wife, Dana; father, Raymond Stobbe and his wife, Joyce; mother, Glenda Rondeau; sister, Jodi Stobbe; and brother Jeff Stobbe. He also leaves behind cousins, relatives through marriage, and many friends.

Craig Raymond Stobbe finished his earthly journey on August 15, 2020, at 59 years of age, in Oklahoma City, Oklahoma. He was prepared to meet Jesus, whom he had accepted as Savior. Craig was born to Raymond and Glenda Stobbe in November... View Obituary & Service Information

The family of Craig Raymond Stobbe created this Life Tributes page to make it easy to share your memories.

Send flowers to the Stobbe family.