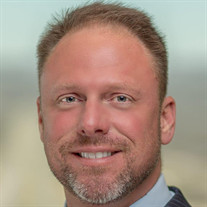 Cody Cole McCollom, 48, left this world and was welcomed into the arms of his Lord and Savior on November 13, 2019.  The son of Mary Alice and David McCollom, Cody was born on May 20, 1971 in Oklahoma City, Oklahoma.  Cody lived his early childhood years in Ardmore, Oklahoma, then later moved to the Oklahoma City/Edmond area.   After graduating from Edmond Memorial High School in 1989, Cody moved to Houston, Texas where he was a manager for Spaghetti Warehouse.  He made his way back to his roots in Oklahoma where he began a lifelong career in sales.  His early occupation was in the car business where he broke records in finance and made many life-long friends.  Cody was a “numbers” guy, so it was no surprise he ventured out and opened his own mortgage loan office.  His journey eventually led him to a position at New York Life where he worked as an insurance agent and securities advisor.  Cody excelled wherever he was planted.  He was happiest when serving others, whether it was helping someone buy their first home or ensuring they secured their future.  In 1997, Cody was introduced to the love of his life, Kimberly Dawn Hinds, by mutual friends.  On April 16, 2000, they were married and their union was blessed with one perfect daughter, Gracey Evan, whom he fondly referred to as “Boogie”.  Cody considered her his greatest accomplishment.  His love for her was unmatched and his every decision was geared toward being a good father and creating the best possible life for his family.  This eventually led to his spiritual journey and accepting Jesus Christ on July 11, 2010.  In those moments, his life was forever changed.  In the years that followed, his focus was on having a Christ-centered life for his family.  He became active in his local church where he became a greeter, served on the kitchen crew, taught Jr. High bible study, was active in VBS and Evangelism Explosion classes and eventually became a deacon.  Every Sunday, he was most known as “the guy that shook everyone’s hand”.  In his free time, Cody could be found on the golf course with friends or busy bowling a perfect 300 game.  He bowled on a men’s league and his expertise was recognized by receiving a USBC 300 ring.  Of all the things he enjoyed, vacationing with his family was #1.  Favorite locations were Disney in Florida, Hawaii and Destin.  Whether it was a week-long trip to Maui or a short jaunt to Branson, these times were most cherished.  Cody was at his best making memories with his family.  Although his time on earth was far too short, he knew his real home was in Heaven.  Our hearts are broken without his presence here with us, yet we rejoice in knowing he is present with the Lord.  Cody is preceded in death by, great grandparents Gladys and H B Foresman; great grandparents Alice and John D Cole; great grandparents Eva Hazel and Norman Cross; great grandparents Leslie and Howe D McCollom; grandparents Jessie Gay and Donald H Cole; grandparents Jeannie and Stuart W McCollom; Uncle Stuart L McCollom.  Cody leaves behind his loving wife of 19 years, Kim of the home, daughter Gracey Evan; parents Mary Alice and David McCollom of Edmond, Oklahoma; sister Chrishian Richell Nelson and husband Brent of Edmond, OK; mother-in-law Shirley Thompson of Oklahoma City, OK; sister-in-law Angie Hines and husband Dale of Tuttle, OK; nieces: Tasha Blair Flores, Presley Reece Nelson, Kassidy Reed Nelson; great nephew Kashen Wayne Collins, and great-niece Elizabeth Blair Collins; Aunt Victoria McNally and husband James, Oklahoma City, OK; Aunt Edy Bauer and husband Cal, Mustang, OK; Uncle Steve McCollom and wife Diane, Oklahoma City, OK; Aunt Madalyn McCollom, Oklahoma City, OK; Aunt Sandy Marler and husband Ray, Oklahoma City, OK, and numerous extended family members and countless friends.

Cody Cole McCollom, 48, left this world and was welcomed into the arms of his Lord and Savior on November 13, 2019.  The son of Mary Alice and David McCollom, Cody was born on May 20, 1971 in Oklahoma City, Oklahoma.  Cody lived his early childhood... View Obituary & Service Information

The family of Cody Cole McCollom created this Life Tributes page to make it easy to share your memories.

Cody Cole McCollom, 48, left this world and was welcomed into...

Send flowers to the McCollom family.