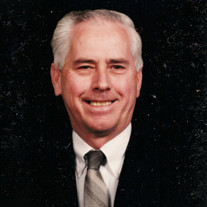 Cleo James “Jim” Gamble, 80, was born on June 8, 1938 to Cleo and Gladys Gamble of St. Charles, Iowa. Jim went to be with the Lord on February 4, 2019 at his home in Kingston, Oklahoma, surrounded by loving family. Jim was raised on the family farm in St. Charles where he remained until he graduated from St. Charles High School in 1957. He married the love of his life, Judy (Davis) Gamble, on February 17, 1961. They soon welcomed their first daughter, Lori Ann, on September 28, 1962. Their second daughter, Glenda Lynn, was born December 2, 1963, and went to be with her Heavenly Father on December 4, 1963. The Gamble family relocated to Oklahoma in 1972, and made their permanent residence in Piedmont, Oklahoma in 1976. Jim retired from Metropolitan Baptist Church after 30 dedicated years of employment. Jim and Judy left their family home of 36 years, retiring peacefully over the last 8 years at Lake Texoma. Jim was a man of high integrity who honored the Lord and deeply cherished his family and friends. Jim was a kind-hearted man with a servant heart, willing to help anyone at the drop of a hat. He had a wonderful smile, and possessed the ability to brighten the lives of others by making everyone around him laugh. Jim cherished nothing more than spending time with his family and took so much pride in showing them off to whoever would listen. Jim lived for weekends full of cheering on his daughter, grandchildren, and great-grandchildren at their various sporting events. He was always the loud one in the stands cheering and critiquing as the game went on. Jim adored family dinners around the table with too much food, easy conversation, and unending laughter. Jim was preceded in death by his daughter Glenda Lynn, his parents Cleo and Gladys, siblings Helen, Edythe, Dorothy, John, Raymond, and other loved ones. Jim is survived by his wife Judith of 58 years, his loving daughter Lori, grandsons Bryan and Brody, great-grandchildren Hadyn, Holdyn, Hudsyn, Emersyn, and Beckett, sibilings Bob, Wilbur, Don, Delores, Marge, Jeanne, Patty, and a host of family and friends. Jim joined the Lord and has been reunited with his loved ones. He will be deeply missed but never forgotten. We look forward to the day we will see him again! Jim’s funeral will be held at 10:00 a.m., Friday, February 8, 2019 at Metropolitan Baptist Church, located at 7201 W. Britton Road, Oklahoma City, Oklahoma 73132. Services are under the direction of Darin M. Corbett of Corbett Funeral & Cremation in Oklahoma City.

The family of Cleo James "Jim" Gamble created this Life Tributes page to make it easy to share your memories.

Send flowers to the Gamble family.