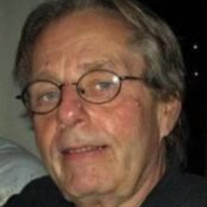 Christopher Wesley “Kit” Cargill passed away on Easter Sunday morning, April 4, 2021, at the VA Hospital in Oklahoma City, OK. He had fought a long and arduous battle against cancer, but did it with determination, dignity, and a strong will to “get well.” Kit (or Chris, as he was known by many) was born March 4, 1947, in Oklahoma City. He was the second of four sons born to his parents, Janet Isabel (Hecker) Cargill and William Dale Cargill. He was pre-deceased by both of his parents and two of his brothers. He is survived by his loving niece, Shawna (Cargill) Carter, her husband, Jeff, her daughter Sheridan Carter; devoted nephew, Jon Christopher Cargill, his wife, Brooke, and his son Landon Cargill; long-time good friends, Bonnie Byrd, and Aaron Shirkey and his son Kelton., and one brother. Kit was a very devoted son and brother, caring for both of his parents in their later years as their health declined and for his younger brother, Tom, who had Down’s syndrome. Kit was a life-long resident of Oklahoma, but did a stint in the U.S. Navy after high school, and served two years in Viet Nam. As an “Army brat,” he had the opportunity to live in Japan and France and to travel extensively throughout Europe. Kit had a great love for fine art, good music, and traveling, and had a gift for decorating and landscaping. He was probably best known as having a passion for justice, peace, and equality for all of humanity. Kit retired in 2019 from Quail Creek Bank, where he had worked for many years, and had many good friends. His retirement plans were to travel around the U.S. in his little sports car that he had purchased for that purpose. He also planned to revisit and reconnect with friends abroad. Kit was a wonderful, loving uncle to Shawna and Chris, a committed friend to Bonnie, and Aaron, and an excellent role-model for his “adopted grandson,” Kelton, and will be tremendously missed by his friends and family. A memorial service will be held at 2:00 p.m., Saturday, April 10, 2021, at Rose Hill Mausoleum, 6001 N. Pennsylvania. If you wish to make a donation in Kit's memory, his request was that you donate to the Dale Rogers Training Center, Special Olympics, or another organization that supports special-needs individuals.

Christopher Wesley &#8220;Kit&#8221; Cargill passed away on Easter Sunday morning, April 4, 2021, at the VA Hospital in Oklahoma City, OK. He had fought a long and arduous battle against cancer, but did it with determination, dignity, and a... View Obituary & Service Information

The family of Christopher Wesley “Kit” Cargill created this Life Tributes page to make it easy to share your memories.

Send flowers to the Cargill family.