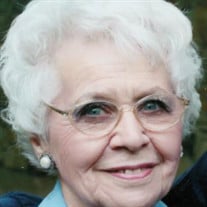 Catherine Ann (Eaton) Richardson March 12, 1928 - July 18, 2020. Catherine passed away in her home in Oklahoma City after a brief battle with cancer at the age of 92. She was born March 12, 1928 in Peoria, Ill, the daughter of Herbert Joseph Eaton and Hermina Pauline Santo, the 5th child in a family of 7. She attended St. Marks Catholic grade school and Academy of Our Lady High School in Peoria. She was just a teenager during WWII as she watched all 4 of her brothers go off to war. She suffered the loss of her brother Herb who was lost at sea. After high school she got a job at Mitchell and Castle in Peoria where she met a young man from Oklahoma. The young man, Edward (Ed) Richardson had served in the Air Force during the war and had moved to Peoria where some of his Air Force buddies were living. He had driven his Harley Davidson motorcycle from Foss, Oklahoma all the way to Peoria, Ill. They fell in love and were married on June 19, 1948. That summer they drove 800 miles down Route 66 (with no air conditioning) so Catherine could meet her new in-laws. Catherine’s new family were red dirt farmers, but she could relate because as a child she helped her grandma and grandpa Santo pick vegetables for their truck farm. Catherine and Ed bought a house in German Town, Illinois, across the river from Peoria. A year later their daughter Cathy was born followed by daughter Arlene and son Nicholas. A few years later they bought a big white house in Peoria where their youngest daughter Barbara was born. In 1960, after the loss of Edward’s mother, they made the hard decision to move to Oklahoma City. Ed was working as a traveling salesman during the week and on the weekends the family would go to Foss where Ed would help with the family farm and Catherine would clean and cook. It was a lot of work, but there were a lot of good times just being with family, playing a round of Rook, and drinking sweet tea. In 1962 they moved out of their little rent house in Britton and bought a bigger home in the Village. It was here they raised a family of 4. Catherine was a homemaker, wife and mother. Every evening the family sat down to a home cooked meal, sometimes Ed’s favorite of fried chicken soaked in gravy. Catherine and Ed put 4 kids through Catholic grade school, high school and college, they were devoted and loving parents. Around 1985 Catherine and Ed bought 5 acres out in the country near Jones, Okla. With the help of their son, friends and family members they built their dream home. It was here Catherine and Ed spent the rest of their lives. They had a big vegetable garden, peach trees and grapes. Ed tinkered with his tractors and Catherine cooked and sewed. Catherine was an expert tailor winning ribbons in the Oklahoma County Free Fairs and Oklahoma State Fairs. Catherine sewed wedding dresses for all her daughters and graduation gowns for her granddaughters. Every Thanksgiving their grandkids would spend the night and then help put up Christmas decorations the next day. Catherine and Ed celebrated 67 years of marriage until Ed passed away at the age of 93. Catherine was a mom and a homemaker, she belonged to bridge clubs, went to “Koffee Klatches’,” was a member of Spring Creek County Home Extension Club, St. Eugene’s School Board, St. Rose Guild, and Altar Society, and was a tireless volunteer for many school and church organizations. She was a mother, a grandmother and a great grandmother. Catherine was always patient and always kind, and will be remembered as a loving friend, wife and mother by all those who had the great opportunity to know and love her. Catherine was preceded in death by her husband Edward A. Richardson, her parents Herbert and Hermina Eaton, brothers James, Joe and Donald. Catherine is survived by her sisters, Sister Bernadette Eaton CSJ, and Eileen McDonough; Daughter Cathy and husband Harry Goett; Grandson Dr. Harry Goett Jr. and wife Dr. Leilani Lee, their children Harry and Hunter; Granddaughter Jennifer Goett Ph.D. and husband Waseem El-Rayes Ph.D. and son Naji; Granddaughter Elizabeth Goett; Grandson Edward Goett and wife Ania Burlinska; Grandson Andrew Goett; Daughter Arlene and husband Jim Jacobs; Granddaughter April Jacobs and husband Ben Alt and son Theo; Son Nicholas Richardson and wife Gail; Granddaughter Emily Stoehr and son James; Grandson Nicholas Richardson; Daughter Barbara and husband Brian Sagraves; Grandson William Sagraves and wife Caitlyn. Due to COVID-19 attendance will be limited for the Prayer Service and Funeral Mass; face masks will be required to attend. Please, contact Cathy Goett if you plan to attend by calling (405) 826-6993 for details. Thank you. The Wake and Funeral Mass will be available on Facebook via Live Stream by going to CorpusChristiCatholicChurchokc

The family of Catherine Ann Richardson created this Life Tributes page to make it easy to share your memories.

Send flowers to the Richardson family.