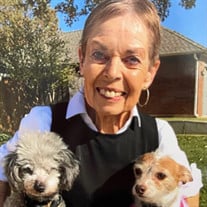 Carlene Edwards – 85, OKC – passed peacefully on December 13th. She was born on January 23, 1935 to the late Carl and Flossie (McCarty) Cone of Yukon, Oklahoma. Carlene was raised in Yukon and kept many of her childhood friends all her life. She was a 1953 graduate of Yukon High School, attended Monticello College for Women in Godfrey, IL, before transferring to the University of Oklahoma. There, Carlene was the President of Chi Omega Sorority and graduated in 1957 with a degree in Sociology. It was also at O.U. that she met her future husband, James O. Edwards, Jr. (Jim), whom she married September 28, 1957. Jim served in the Air Force on active duty as a Staff Judge Advocate in Germany, France, and England. Together, they loved traveling and living abroad. Upon returning to the U.S., they were stationed in Waco, Texas, where Jim retired from the Air Force as Lt. Colonel. They later moved to OKC, where Jim worked in the oil and gas industry as an Attorney for Mustang Fuel Corp. and President/CEO of Enogex. They raised their two children in OKC. Carlene was a supportive spouse, loving mother, and a homemaker. She had many friends and was invested in various civic programs. She was a board member of the Oklahoma Philharmonic Society and was involved in different Symphony programs, including the annual Show House. Carlene converted to Catholicism as an adult and became a member of the parish of St. Joseph’s Catholic Church. In 2016, she was among those named “Catholic Woman of the Year” by the Archdiocese of Oklahoma City. Carlene is survived by her children, Mike Edwards of OKC and Kathleen Edwards Chase of Pompton Plains, NJ. She has three grandchildren, Alex Croft (Ryan), Emmy Chase, and Caden Chase. She also has many nieces and nephews whom she adored. Carlene was preceded in death by her husband, Jim; her sister Patricia Blaschke of Lompoc, CA; her mother and father; and many friends. The interment will be private. The family has requested any donations made in her memory go to the Oklahoma Philharmonic Society, Inc., 424 Colcord Drive, Suite B, OKC, OK 73102.

Carlene Edwards &#8211; 85, OKC &#8211; passed peacefully on December 13th. She was born on January 23, 1935 to the late Carl and Flossie (McCarty) Cone of Yukon, Oklahoma. Carlene was raised in Yukon and kept many of her childhood friends... View Obituary & Service Information

The family of Carlene (Cone) Edwards created this Life Tributes page to make it easy to share your memories.

Send flowers to the Edwards family.