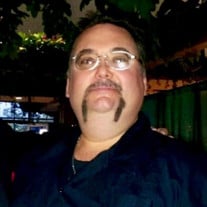 On January 5th, at the age of 53, Bradford “Brad” Dean Butler went to be with the Lord. Loved by too many to count, his heart seemed as big as his 6’5” stature. He enjoyed the comradery of many different groups of people. Many friends from one circle would become friends from another and what began their connection was Brad. He loved giving gifts to family and friends, especially to children. Brad was a man of integrity that didn’t compromise his beliefs. He was passionate about Jesus, his country and the freedoms the constitution gives its people. Sometimes his passion got the best of him resulting in repeatedly being banned from Facebook and Instagram. Brad was born April 20 1967, in Oklahoma City. Shortly after birth, he was adopted by James “Paul” and Geneve “Genie” Butler but Brad considered them his real mom and dad. He had a striking resemblance to Paul so unless Brad told you he was adopted; you wouldn’t have known. He grew up in Edmond and loved the arts. He took tap dancing for many years, played piano, trombone and tuba. After graduating from Edmond Memorial High School, he attended Central State University (UCO) and played the tuba in band. He had many interests and was well read in many subjects. Whatever his interest, he’d work hard to master it and loved teaching others what he’d learned. He had an affection for elephants and had quite a collection. He was great at both chess and billiards. Brad liked a large range of music from Queen and Trans-Siberian Orchestra to Petra and Keith Greene. One of his favorite activities was dressing up in medieval costume to attend Renaissance and Medieval Fairs. He made his own armor and equipment. He’d also make them for others when they asked. He was known for being an intense jouster and chased off many competitors. Brad worked various jobs throughout his life and often multiple jobs at the same time. He worked for a time in the trucking industry and it took him all over the United States. He loved seeing the country. When not on the road, he’d work security. He was a gentle giant but could take care of business if needed. He’d watch out for others and was quick to teach others how to be and stay safe. He was both a certified search and rescue diver as well as a Dive Master (one who monitors the safety of new divers). He was a CLEET approved OSBI fire arm instructor, a transit and railway instructor, and an adjunct instructor with the FLETC (Federal Law Enforcement Training Center) in addition to being a state licensed investigator. Brad left a deep mark on this world and in so many hearts. He will be missed by many including his “Scrapbooking” group. Brad is preceded in death by his parents Paul and Genie, uncle Leroy Lett, and cousin Marvin Lett. He is survived by his aunt Charlene Morrow of Edmond, aunt Iletta Lett of Snyder and many cousins some were family and others not but affectionately called him “Cuz”.

The family of Bradford "Brad" Dean Butler created this Life Tributes page to make it easy to share your memories.

Send flowers to the Butler family.