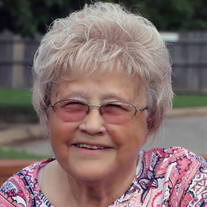 Almira Lorraine Parsons, age 84, of Oklahoma City began her eternity in the presence of God on 11 December 2020. The youngest of Rollo and Ada Estelle Parsons’ ten children, Almira was born at home on 22 February 1936, in Cheney, Kansas, and often quipped that by the time she arrived there were no “tall pieces, just short and wide pieces left.” Almira often talked about her life and friends in Cheney and graduating high school in 1953. She then attended Manhattan Bible College (Manhattan, Kansas) where she met and married the love of her life, Mark Earl Zimmerman on 31 May 1958. They had five children, Christy, Cindy, Mark, Matthew and Michael. Together Mark and Almira ministered in several Kansas and Nebraska churches; Almira was ordained and preached in Iowa Point in NE Kansas. The family moved to Oklahoma City in 1970 and continued in various ministries until Mark’s death in 1977. Almira then went to work for the State of Oklahoma at Children’s and University Hospitals where she worked as a Financial Advisor until her retirement in 1996. Almira kept quite busy even after retirement, actively involved with her church, doting on grandchildren, and shopping for bargains at garage sales and resale shops. Almira moved to Baptist Retirement Village in Oklahoma City, in 2012 where she made lots of new friends, especially her partner in crime Kay Roberts. Oh, what a pair! The two had many things in common and became like sisters; doing almost everything together, even contracting COVID at the same time. She also found a great friend in Gary Tyndall who helped her in many ways, drank coffee with her, and became her little brother. Almira was preceded in death by her parents Rollo & Ada Estelle Parsons; her daughter Cindy; her husband Mark; her sisters Dorothea, Myraline, and Joann; her brothers Lonnie, Veral, Ray, Galen and Dick. She will be truly missed by her family: Her children: Christy (Jon) Evans of Warr Acres; Mark (Debbie) Zimmerman of Amarillo, Texas; Matthew (Amanda) Zimmerman of Wichita, Kansas; and Michael Zimmerman of Guthrie, Oklahoma. Her three foster daughters: Barbara Johnson of Wareham, Massachusetts; Lydia Johnson of Walnut, Iowa; and Margie (Steve) Gellenbeck of Guthrie, Oklahoma. Her grandchildren: Tommy (Taryn) Evans of Oklahoma City; Kirk (Kristel) Evans of Piedmont, Oklahoma; Mycal Lynn Banning of Mustang, Oklahoma; Justin Zimmerman of Newcastle, Oklahoma; and Madison & Kyler Zimmerman of Wichita, Kansas. Her three great grandchildren: Wilson, Walter and Taylor of whom she adored. Almira is survived by her brother Wayne and wife Florene Parsons of Pratt, Kansas; her sister-in-law Betty Parsons of Wichita, Kansas; her brother-in-law Pete Compton of Cheney, Kansas, and many nieces and nephews. In these unprecedented and difficult times, the family is unable to provide the traditional funeral. Mom chose to be cremated and asked her ashes be spread in three locations (with her mother, her daughter Cindy, and her husband Mark). Almira left a wonderful legacy for her family of which they wish to celebrate. She loved the family get-togethers and meals; therefore, her family will meet and eat and privately memorialize and celebrate her life; then her children will complete the spreading of her ashes at a later time. If you would like to honor Almira’s life, her family and friends are invited to share messages, memories and photos on her memorial page here. Donations, in lieu of flowers, should be directed to the non-profit ministry Reaching Our City (ROC) at 7710 NW 10th, OKC, OK 73127; a cause dear to our mom.

Almira Lorraine Parsons, age 84, of Oklahoma City began her eternity in the presence of God on 11 December 2020. The youngest of Rollo and Ada Estelle Parsons&#8217; ten children, Almira was born at home on 22 February 1936, in Cheney, Kansas,... View Obituary & Service Information

The family of Almira L. Zimmerman created this Life Tributes page to make it easy to share your memories.

Send flowers to the Zimmerman family.