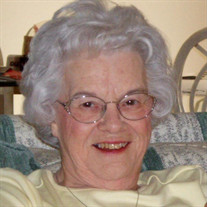 Alice Irene Krapff, 93, of Yukon, OK passed away peacefully surrounded by her daughters on Wednesday, December 29, 2021. Alice was born on November 8, 1928 to Lawrence Matthew and Violet Irene Doerfler in Amarillo, TX. Alice and her family moved to Oklahoma City when she was a small child where she continued to live and raised her family. In 1950, Alice married William E. “Bill” Krapff at Sacred Heart Church in Oklahoma City. They were married for 55 years until Bill’s passing in 2005. Together they raised six children, three boys and three girls. Alice was a dedicated mother and wife, always busy supporting her household, children and husband. After her children were school aged, Alice worked as an executive secretary for many years. Being a grandma was a role Alice thoroughly enjoyed. She was blessed with 19 grandchildren, 35 great grandchildren, one great great grandchild along with several step grandchildren and step great grandchildren. Alice loved to read, listen to music, play the piano in her younger years and sing. She would sing, making up sentences and stories in song, never missing a beat. Alice treasured her travels throughout her life. She liked sharing stories with her loved ones about her adventures both when she was young and old. She never missed a visit from a pretty bird. Always pointing out the robin, blue bird or cardinal (hopefully, our lives are blessed with cardinal visits from her). Alice enjoyed sunsets, never letting them go unnoticed. She collected giraffes and this was apparent by anyone who would visit her. She was always up to go anywhere, do anything and be with family. Her sense of humor was quite witty too, and if you were lucky enough, she probably embarrassed you a time or two with her cheeky advice or response. Alice was our family’s prayer warrior. She prayed and prayed and prayed for all of us. She would have so many prayers for so many of us and so many things, she started making “blanket prayers”, as she referred to them. She would say, “I will add that to my blanket prayer.” She offered her prayers always and she prayed habitually. Alice joins her husband (Bill), her parents (Lawrence and Violet) and her brother (Larry Joseph Doerfler) in heaven. Along with her son-in-laws (Fred Sanders and Jim Forgue) and grandson (Jeffery Forgue). She is survived by many family members including her sister-in-law, Norma Doerfler of Las Vegas, her six children, Fred and wife Fran of OKC, Karen Forgue of Edmond, David of Tulsa, Mark and wife Carrie of OKC, Cheryl and husband Mike Privett of Tuttle and Terrie and husband Clarke Swinney of Perryton, TX and her many cherished grandchildren and their spouses. A celebration of Alice’s life will be scheduled at a later date, allowing her family and friends to congregate safely outdoors. Memorials may be sent to a charity of your choice.

Alice Irene Krapff, 93, of Yukon, OK passed away peacefully surrounded by her daughters on Wednesday, December 29, 2021. Alice was born on November 8, 1928 to Lawrence Matthew and Violet Irene Doerfler in Amarillo, TX. Alice and her family... View Obituary & Service Information

The family of Alice Irene Krapff created this Life Tributes page to make it easy to share your memories.

Send flowers to the Krapff family.