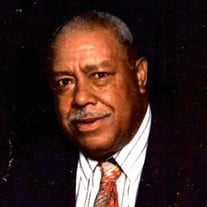 Alfred Lynell Walker, long time resident of Oklahoma City, died peacefully at his home surrounded by family on Friday September 3, 2021. He was born at home in the community of Corinth/Larissa, Texas on November 28, 1934 to Alfred Sr. and Exlona Walker. Alfred was raised on a farm and gave his life to Christ at an early age. He was a young deacon and Sunday School teacher. He also served as the Sunday School Superintendent at the Larissa Methodist Church. He attended school in Larrisa/Cuney, Texas. Alfred was blessed to have two beautiful women in his life. He married Rosella with whom he had 5 children. They were married for over 50 years. After her death, his family introduced him to Della Roberts, a registered nurse, whom he married at the Mansion on Lake Overholser show house in June 2016. He was very a enterprising young man in his youth which led him to start Walker’s Used Tire Company. In 1957 he took on a job working for Nichols Hills Methodist Church when Byron Cravens was Minister. Minister Cravens mentored him in his faith journey. Rev George Graham moved Alfred from the boiler room to the front office where he hosted and answered phone calls. Alfred was a person one could learn from in how he dealt with others. He was comfortable with people of all economic levels, races, religions, and countries. He treated women with a level of respect that made them feel like he was their best friend. He practiced his faith with everyone he met. He had a 60 year connection to Nichols Hills Methodist Church starting as an employee to being a member of the Board Of Trustees. Alfred and Rosella were the first African-American members of Nichols Hills. He became very involved in Missions going on a mission trip to Cuba, Kenya and Mexico. In each of these countries, he was treated like he was their long lost brother. He treated them like he had known them forever. He spent his life helping people who were down on their luck. The church set up a fund – The Alfred and Rosella Walker Fund- that he could use to help people that he knew needed help. He truly cared about the members of Nichols Hills. He actually had his own private ministry of connecting with the members in their times of troubles keeping abreast of what was happening in their lives. Alfred would encourage and go with all the new ministers out to meet the members of the church, especially those that were homebound and sick because he knew everyone and helped break the ice. Under Pastor Grayson Lucky, Alfred was anointed Pastor Emeritus in recognition for all his faith and kindness. He was one of a kind-unique, the type of person you only meet once in a lifetime. Alfred loved to work in his flower and vegetable garden. He was known to have the biggest cabbage plants. He would bring his harvest to share with his church family and neighborhood community. He took pride in his home, he was called the yard man by his neighbors. He was very meticulous when it came to his yard. The grass had to be cut just right. Alfred was often known to spend hours on his hands and knees picking out weeds from his gardens and yard. He is survived by his wife Della, Ronald(Pam) Walker, Mary(Nathaneal) Crownover, Alfred Walker, III, and Janita (Ronald ) Blair , all of the Oklahoma City metro area, nephew Lamar(Karen) Brown of Strasburg, Colorado, as well as many grandchildren, nieces, nephews and great grandchildren and a host of family and friends. He was preceding in his death by Rosella, his first wife and his daughter Anita Walker. The children of Alfred would like to extend a very special THANK YOU to our wonderful stepmother, Della, for all of the love and care that she has shown towards our beloved father during his brief illness. We appreciate you, Della, and are forever grateful. We love you. The family would also like to express their sincere gratitude and appreciation to Nichols Hills United Methodist Church family for their kind deeds, love and support shown during this time of bereavement. May God Bless you and please continue to pray for us as we mourn. “God saw your getting weary and did what he knew best. He came and stood beside you and whispered, come home to rest.”

Alfred Lynell Walker, long time resident of Oklahoma City, died peacefully at his home surrounded by family on Friday September 3, 2021. He was born at home in the community of Corinth/Larissa, Texas on November 28, 1934 to Alfred Sr. and... View Obituary & Service Information

The family of Alfred L. Walker Sr created this Life Tributes page to make it easy to share your memories.

Send flowers to the Walker family.