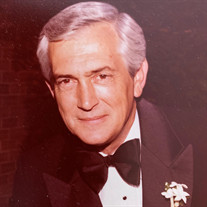 A.D. “Dee” Sadler, Jr. December 15, 1928 – November 1, 2018 Born in Grandfield, OK, to A. D. Sadler, Sr., and Alberta Smith Sadler, on Dec. 15, 1928. The family later moved to Oklahoma City where “Dee” attended both Taft and Harding Jr. High Schools and established many life-long friends. He graduated in 1947 from Classen High School and attended the University of Oklahoma where he was a member of Sigma Alpha Epsilon Fraternity. While at OU, he met the love of his life, Beth Ann Pound (affectionately called “Mike”), and they were married in Ardmore, OK, on Feb. 23, 1951. Dee enlisted in the US Air Force during the Korean War and they were stationed in Roswell, NM. While in Roswell, Dee & Mike gave birth to their first child, Stan, in 1952. Later that year, they relocated to Ardmore, OK, and were blessed with 3 more children, Greg, Michael (“Hall”), and Shannon. Relocating to Oklahoma City in 1961, Dee accepted a sales position with WKY Radio and eventually became the general manager. Prior to retiring he worked for Macklanberg Duncan of Oklahoma City. He was a devoted husband, father, and friend who was always there to lend a hand to anyone in need. Dee & Mike were blessed with an abundance of friends with whom they enjoyed sharing family gatherings, social events, entertaining, travel and charitable activities. Once named as one of the 10 most handsome men in Oklahoma, Dee was always humble and kind. He was an avid golfer and loved his golfing buddies. Shortly before his death, Dee, jokingly, stated that he wants only 5 words spoken at his funeral, but he never said which ones. His children think those words are: “I Love You Beth Ann.” Dee was predeceased by his parents and his only sibling, William Jack Sadler. He is survived by his loving wife of 67+ years, Beth Ann; son, Stan Sadler and his wife Tracy, of Edmond, OK; son, Greg Sadler and his wife, Sandra, of San Juan Capistrano, CA; son, Michael Sadler and his wife, Susie, of OKC; daughter, Shannon Crites and her husband, Keith, of Ardmore, OK; 12 grandchildren - Kristianne McCrary, Brooke Lochmann and her husband, Austin; Whitney Brown and her husband Brian; Josh Sadler and his wife, Blake; Cody Crites and his wife Brittany; Matt Sadler and his fiancé, Laci; Charlee Sadler; Noel Williams; Calvin Williams; Stefano Pecci; Sean Sadler; and Ryan Sadler; 15 great grandchildren; 1 great-great grandchild; and 1 nephew, Bill Sadler. Sincerest thanks from the Sadler family to the Smith & Trigg families and many, many more loving and supportive friends. The family would also like to extend its appreciation to Centennial Hospice and a special thank you to Misha Hill. Dee & Mike were long-time members of the Episcopal Church and, most recently, All Souls Church of OKC. In lieu of flowers, the family requests contributions to All Souls Episcopal Church, 6400 N. Pennsylvania Ave., OKC 73116. Memorial services are currently pending, please check back for updates.

The family of A. D. Sadler Jr. created this Life Tributes page to make it easy to share your memories.

Send flowers to the Sadler family.